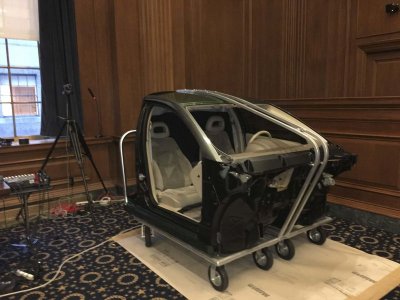 NEW YORK (Reuters) – An Oklahoma man suing General Motors in the first trial in federal litigation over its massive engine switch recall has hired a criminal defense attorney after the carmaker accused him and his wife of making misleading statements in their testimony.

The move was prompted by a motion Monday from GM claiming the Scheuers may have given false testimony to jurors about the circumstances surrounding their eviction from their home months after Robert said he was injured in an accident involving a 2003 Saturn Ion, one of 2.6 million vehicles with the faulty switch recalled in 2014.

If successful, GM’s motion may damage the credibility of a key player in an ongoing trial over the switch, which is the subject of several hundred lawsuits.

Scheuer’s lawsuit accuses GM of concealing the defect, which has been linked to nearly 400 injuries and deaths. He says he suffered physical and emotional damages as a result of a 2014 car crash in which his air bags failed to deploy, allegedly due to the switch.

During testimony last week, the Scheuers said that after the crash they were evicted from their “dream house” because they did not make a promised payment.

GM said that, after the trial began, it was contacted by the real estate agent involved in the house sale who said he believed Scheuer may have altered a check stub to make it appear as if he had sufficient funds to pay for the house.

GM said this contradicted the Scheuers’ accounts as to why the payment was not delivered.

Scheuer’s civil lawyers urged the judge to deny GM’s request for the agent to testify. They said Scheuer was not pursuing any monetary damages in connection with his housing.

Furman is expected to rule on GM’s motion in the coming days. GM spokesman Jim Cain said GM’s briefs “lay out a very troubling fact pattern and raise questions that need to be answered.”

Civil lawyers and Lisa Scheuer’s criminal defense attorney could not be reached for comment, and Chaudhry declined comment.

The case is In re: General Motors Ignition Switch Litigation, U.S. District Court for the Southern District of New York, No. 14-2543.