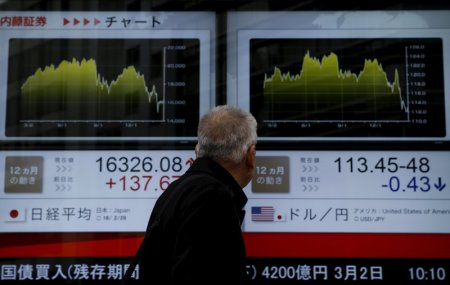 “As long as the U.S. economic recovery is continuing, I would think the rally in global equity markets will continue,” said Takeru Ogihara, chief strategist at Mizuho Trust Bank.

Japan’s Nikkei gained 0.8 percent while U.S. stock futures ticked up 0.2 percent in early Asian trade, though it is still slightly down on the quarter.

With the U.S. seen as one of the brightest spots in the global economy, signs of resilience there are pivotal to boosting market sentiment.

As investors’ risk appetite recovers, the U.S. dollar is also edging up against other major currencies.

In the past week, the dollar has been helped by comments from some Fed officials indicating that policymakers think they could raise interest rates as early as next month.

U.S. PCE inflation data due at 1230 GMT could fan expectations of an early rate move if it shows increasing inflationary pressure.

“The PCE inflation has been rising of late. The Fed has said the prices will be the key in determining policy so the data should attract a lot of attention,” said Masahiro Ichikawa, senior strategist at Sumitomo Mitsui Asset Management.

The data will be followed by speech from Federal Reserve Chair Janet Yellen on the economic outlook and monetary policy on Tuesday. A few other Fed policymakers are also due to speak on the same day, making the Fed’s policy the biggest focus for now. [FED/DIARY]

Given that money markets are pricing in only about a 50 percent chance of a rate hike in June, with hardly any significant likelihood in April factored in, signs of a tightening in the next quarter could rattle financial markets.