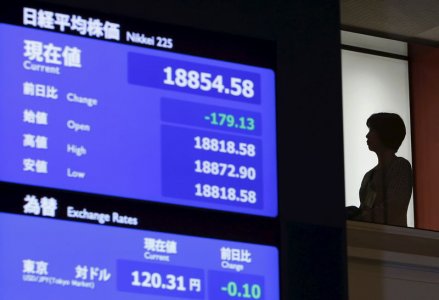 TOKYO (Reuters) – Asian shares hovered near four-year lows and oil prices languished at near 12-year lows on Tuesday as investors fretted over whether Beijing may be losing control of the economy.

MSCI’s broadest index of Asia-Pacific shares outside Japan rose 0.3 percent in early trade but still stood near a four-year low touched on Monday, and was still down more than 8 percent since the start of 2016.

Japan’s Nikkei fell 1.3 percent after a market holiday on Monday, hitting a three-month low and down over 8 percent so far this year.

From the beginning of year, markets have been rocked by plunges in Chinese stock markets, the yuan’s fall and subsequent heavy intervention by the Chinese authorities to push it back up.

The chaotic moves led to worries China’s economy may be in for tough time rather than stabilising as some had hoped.

The immediate focus is on how China’s central bank will guide the yuan at its fixing after its chief economist said it plans to keep the yuan basically stable against a basket of currencies.

MSCI’s broadest gauge of world stocks fell to its lowest level since Sept 2013, having shed 6.6 percent so far this year.

On Wall Street, the S&P 500 managed to stabilize on Monday after three straight days of one-percent-plus declines, ending the day up 0.1 percent.

“It is a good sign that U.S. shares bought back in late trading to end in the positive territory… Maybe they were helped by the view that the Fed may not be able to raise rates when markets were gripped by fear over China and falling oil prices,” said Masahiro Ichikawa, senior strategist at Sumitomo Mitsui Asset Management.

Indeed, money market futures are starting to price out the chance of multiple Fed rate hikes this year, with only a roughly 50 percent chance of a second rate hike priced in. At the start of the year futures were fully pricing in two rate hikes.

The market is far from convinced that the Fed is going to raise rates in March, after implementing its first rate hike in almost a decade only last month.

Commodity prices remained under severe pressure, with oil prices hitting new 12-year lows on concerns about slow demand and oversupply – including U.S. shale oil production and a likely supply increase from Iran after the end of sanctions on its oil exports.

Copper , seen as a good gauge of the strength of the global economy because of its wide industrial use, also fell more than two percent on Monday to hit 6 1/2-year low of $4,381 per tonne.

In the currency market, commodity-linked currencies stayed under pressure. The Australian dollar dipped 0.2 percent in early trade to $0.6980 after a small bounce on Monday, edging towards the four-month low of $0.6927 set earlier on Monday.

South Africa’s rand was fragile at 16.81 rand to the dollar after a massive plunge on Monday that briefly took it to a record low of 17.995.

The dollar was firmer against other major currencies.

The yen, which had been buoyed by safe-haven flows, also stepped back from a 4 1/2-month high touched on Monday at 117.70 yen to the dollar .

The British pound was particularly weak due to waning expectations of a rate hike by the Bank of England as well as uncertainty on a referendum on whether or not Britain should stay in the European Union.