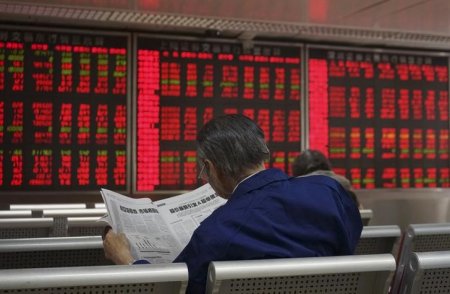 TOKYO (Reuters) – Asian shares sagged on Wednesday as oil prices sank again due to fading hopes of a deal to curb a global supply glut, prompting investor to seek shelter in safe-haven assets and lifting bonds and gold to multi-month highs.

As the global economy falters, sapping demand for everything from consumer electronics to cars to commodities, investors are anxiously awaiting surveys on the services sector in China and the Unites States – the world’s biggest two economies – due later in the day.

“The U.S. economic data has been soft especially in the manufacturing sector so the key is how much the services sector is holding out,” Sumitomo Mitsui Asset’s Ichikawa said.

The U.S. ISM non-manufacturing PMI is expected to dip to 55.1 in January from 55.8 in December. That would be the lowest reading in almost two years but still above the 50 mark that separate contraction and expansion.

Benchmark Brent crude slumped 4.4 percent on Tuesday while U.S. crude fell an even bigger 5.5 percent, settling below $30 a barrel.

Brent gave up its gains made over the last three sessions while U.S. futures wiped out their gains made in more than a week.

Hopes for a step to cut production dimmed this week as no deal has emerged and talks between Russia’s energy minister and Venezuela’s oil minister on Monday failed to result in any clear plan to reduce output. [O/R]

Oil prices have fallen about 70 percent in the past 18 months or so as producers had vastly expanded capacity over recent years, driven by strong growth in emerging economies especially China.

The uncertainty around global growth has prompted investors to slash back their expectation of future U.S. rate hikes, with Federal fund rate futures no longer pricing in a full chance of even one rate hike this year.

That in turn made precious metals, which pays no interest, attractive asset for many investors, especially at a time when central banks in Japan and Europe are now adopting negative interest rates.