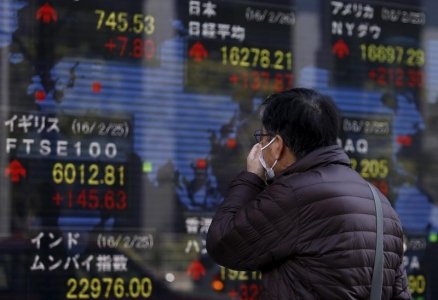 TOKYO (Reuters) – Asian shares gained early on Thursday and the dollar was on the defensive after suffering substantial losses following the U.S. Federal Reserve’s move to reduce the number of interest rate hikes planned for this year.

The potential for more money to continue flowing into commodities and equities, rather being lured by higher U.S. interest rates, boosted crude oil and emerging market stocks.

Global growth concerns, particularly regarding China, have rattled markets through much of the this year.

“In our view, the Fed has become increasingly responsive to changes in financial conditions. We believe this sensitivity is a problem since we see the Fed’s intended policy actions as contributing to the very financial conditions that led to its eventual inaction,” strategists are Barclays wrote.

The dollar index hovered near a one-month low of 95.539 hit overnight after the Fed reduced its expectations for interest rate hikes in 2016 to two from four.

Commodity-linked currencies rose strongly as commodities such as oil and iron ore soared on news of the Fed’s decision.

The Australian dollar was steady at $0.7543 after jumping 1.2 percent on Wednesday and the Canadian dollar was also firm at C$1.3122 to the dollar after rallying nearly 2 percent to a four-month peak of C$1.3094 overnight.

Major producers firming up plans to meet in Qatar to discuss an output freeze also shored up oil prices.