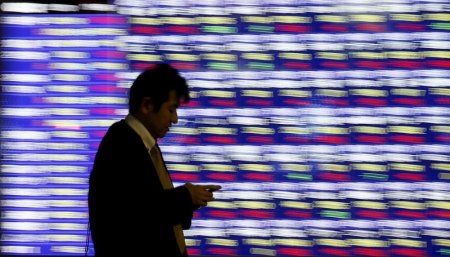 “After a strong U.S. and European session, Asian markets are all looking for further gains today,” Angus Nicholson, market analyst at IG in Melbourne, said in a note to clients.

“Volumes have been very light at the moment, but that has seemingly been positive news for markets across the region,” he said.

MSCI’s broadest index of Asia-Pacific shares outside Japan was up 0.3 percent, on track for a monthly gain of 0.4 percent though down nearly 12 percent for the year.

Australian shares were up 0.9 percent.

On Wall Street, major U.S. indexes each gained more than 1 percent. All 10 major S&P sectors ended with gains, led by a 1.34-percent rise in the technology sector , which lifted the S&P 500 to a modest increase for the year.

Japan’s Nikkei was up 0.6 percent, poised to gain over 9 percent for the year, though down more than 3 percent for December.

U.S. crude futures began Asian trading under pressure, and were last down 1.7 percent at $37.23.

But weekly data from industry group the American Petroleum Institute (API) showed a rise of almost 3 million barrels in U.S. crude inventories, defying expectations of no change and rekindling fears of a supply glut.

The yield on benchmark 10-year U.S. Treasury notes stood at 2.299 percent in early Asian trade, compared with its U.S. close of 2.307 percent on Tuesday.

The yield on the U.S. two-year note closed at 1.095 percent on Tuesday after earlier touching its highest level since April 2010.

The dollar index , which tracks the greenback against a basket of six rival currencies, was up 0.1 percent at 98.196.

The index rose to nearly a one-week high of 98.413 on Tuesday, from a nearly two-week low earlier in the session. It is up 8.8 percent for the year, though down nearly 2 percent for the month as investors pare their dollar-long positions after the U.S. Federal Reserve’s widely anticipated interest rate increase earlier in December.