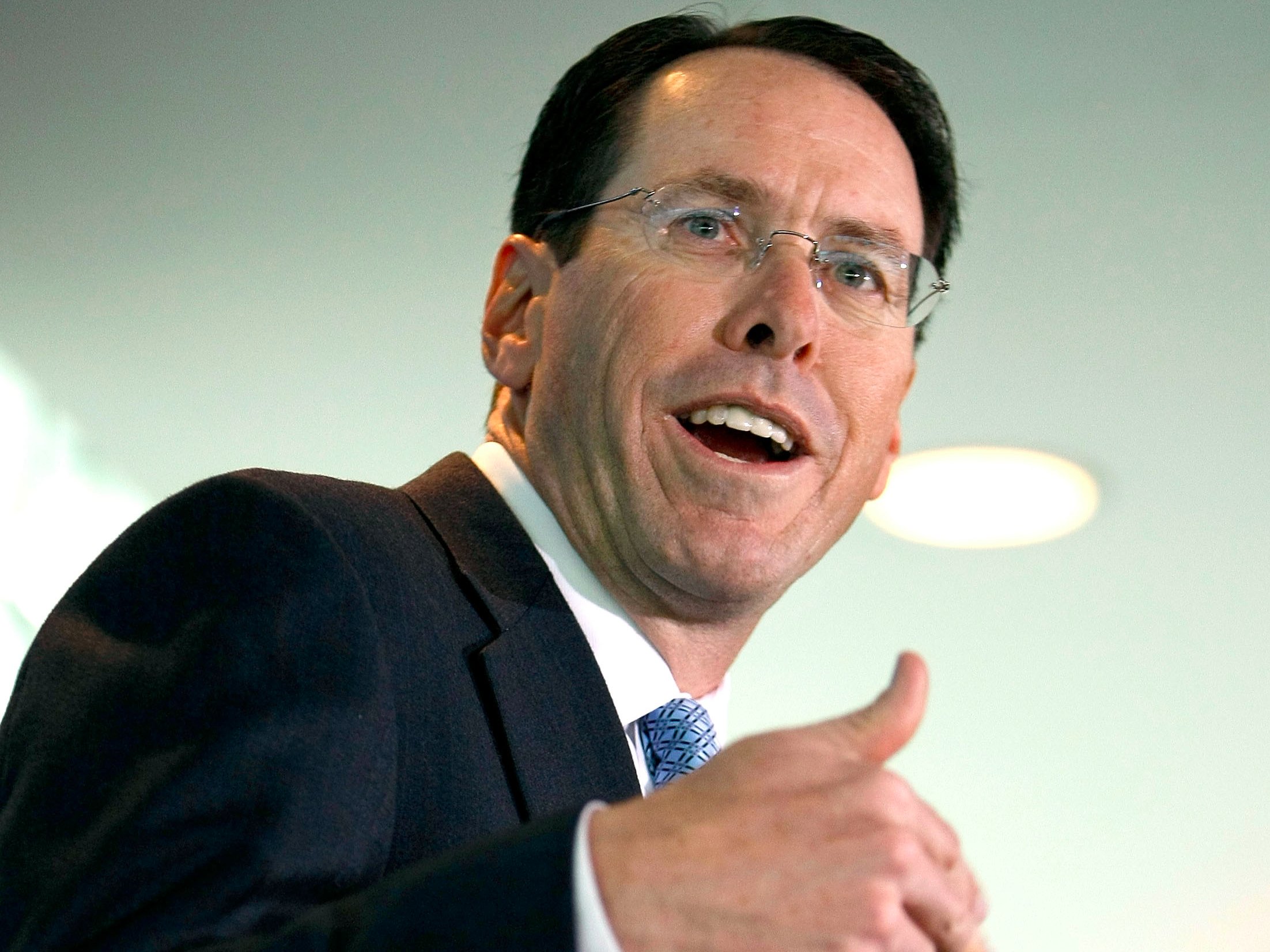 They announced the agreement Saturday night, following a string of reports in recent days that appeared to have accelerated the talks between the two companies.

The move means AT&T will own networks like CNN, HBO, TNT, and several other media properties. AT&T will likely face a harsh regulatory process, but there is some precedent. Comcast, another operator, was allowed to buy NBC Universal in 2013.

The companies said in a statement that the deal will allow AT&T to deliver Time Warner content to any device as viewing habits shift from traditional linear TV to over the top web and on-demand services.

AT&T gains loads of valuable properties in the deal, ranging from “Harry Potter” to “Game of Thrones” to all the super heroes in the DC comics universe.

This is the second mega deal for AT&T in the past year. AT&T merged with DirecTV in 2015 and plans to launch a streaming TV service later this year. The ultimate goal is to provide all DirecTV content over the internet without the need for a satellite dishes by 2020.

It’s also a much different approach than AT&T’s rival Verizon, which is going after online content instead of TV content through its purchase of AOL and its impending purchase of Yahoo. AT&T appears to want to cash in on traditional TV content and ad dollars while Verizon wants to go against Google and Facebook for online ads.

Here’s the full announcement from AT&T:

AT&T Inc. (NYSE:T) and Time Warner Inc. (NYSE:TWX) today announced they have entered into a definitive agreement under which AT&T will acquire Time Warner in a stock-and-cash transaction valued at $107.50 per share. The agreement has been approved unanimously by the boards of directors of both companies.

The deal combines Time Warner’s vast library of content and ability to create new premium content that connects with audiences around the world, with AT&T’s extensive customer relationships, world’s largest pay TV subscriber base and leading scale in TV, mobile and broadband distribution.

“This is a perfect match of two companies with complementary strengths who can bring a fresh approach to how the media and communications industry works for customers, content creators, distributors and advertisers,” said Randall Stephenson, AT&T chairman and CEO. “Premium content always wins. It has been true on the big screen, the TV screen and now it’s proving true on the mobile screen. We’ll have the world’s best premium content with the networks to deliver it to every screen. A big customer pain point is paying for content once but not being able to access it on any device, anywhere. Our goal is to solve that. We intend to give customers unmatched choice, quality, value and experiences that will define the future of media and communications.

“With great content, you can build truly differentiated video services, whether it’s traditional TV, OTT or mobile. Our TV, mobile and broadband distribution and direct customer relationships provide unique insights from which we can offer addressable advertising and better tailor content,” Stephenson said. “It’s an integrated approach and we believe it’s the model that wins over time.

“Time Warner’s leadership, creative talent and content are second to none. Combine that with 100 million plus customers who subscribe to our TV, mobile and broadband services – and you have something really special,” said Stephenson. “It’s a great fit, and it creates immediate and long-term value for our shareholders.”

Time Warner Chairman and CEO Jeff Bewkes said, “This is a great day for Time Warner and its shareholders. Combining with AT&T dramatically accelerates our ability to deliver our great brands and premium content to consumers on a multiplatform basis and to capitalize on the tremendous opportunities created by the growing demand for video content. That’s been one of our most important strategic priorities and we’re already making great progress — both in partnership with our distributors, and on our own by connecting directly with consumers. Joining forces with AT&T will allow us to innovate even more quickly and create more value for consumers along with all our distribution and marketing partners, and allow us to build on a track record of creative and financial excellence that is second to none in our industry. In fact, when we announce our 3Q earnings, we will report revenue and operating income growth at each of our divisions, as well as double-digit earnings growth.

Bewkes continued, “This is a natural fit between two companies with great legacies of innovation that have shaped the modern media and communications landscape, and my senior management team and I are looking forward to working closely with Randall and our new colleagues as we begin to capture the tremendous opportunities this creates to make our content even more powerful, engaging and valuable for global audiences.”

Time Warner is a global leader in media and entertainment with a great portfolio of content creation and aggregation, plus iconic brands across video programming and TV/film production. Each of Time Warner’s three divisions is an industry leader: HBO, which consists of domestic premium pay television and streaming services (HBO Now, HBO Go), as well as international premium & basic pay television and streaming services; Warner Bros. Entertainment, which consists of television, feature film, home video and videogame production and distribution. Warner Bros. film franchises include Harry Potter & DC Comics, and its produced TV series include Big Bang Theory and Gotham; Turner consists of U.S. and international basic cable networks, including TNT, TBS, CNN and Cartoon Network/Adult Swim. Also, Turner has the rights to the NBA, March Madness and MLB. Time Warner also has invested in OTT and digital media properties such as Hulu, Bleacher Report, CNN.com and Fandango.

The new company will deliver what customers want — enhanced access to premium content on all their devices, new choices for mobile and streaming video services and a stronger competitive alternative to cable TV companies.

With a mobile network that covers more than 315 million people in the United States, the combined company will strive to become the first U.S. mobile provider to compete nationwide with cable companies in the provision of bundled mobile broadband and video. It will disrupt the traditional entertainment model and push the boundaries on mobile content availability for the benefit of customers. And it will deliver more innovation with new forms of original content built for mobile and social, which builds on Time Warner’s HBO Now and the upcoming launch of AT&T’s OTT offering DIRECTV NOW.

Owning content will help AT&T innovate on new advertising options, which, combined with subscriptions, will help pay for the cost of content creation. This two-sided business model — advertising- and subscription-based — gives customers the largest amount of premium content at the best value.

This purchase price implies a total equity value of $85.4 billion and a total transaction value of

The cash portion of the purchase price will be financed with new debt and cash on AT&T’s balance sheet. AT&T has an 18-month commitment for an unsecured bridge term facility for $40 billion.

AT&T expects the deal to be accretive in the first year after close on both an adjusted EPS and free cash flow per share basis.

AT&T expects $1 billion in annual run rate cost synergies within 3 years of the deal closing. The expected cost synergies are primarily driven by corporate and procurement expenditures. In addition, over time, AT&T expects to achieve incremental revenue opportunities that neither company could obtain on a standalone basis.

Given the structure of this transaction, which includes AT&T stock consideration as part of the deal, AT&T expects to continue to maintain a strong balance sheet following the transaction close and is committed to maintaining strong investment-grade credit metrics.

By the end of the first year after close, AT&T expects net debt to adjusted EBITDA to be in the 2.5x range.

Additionally, AT&T expects the deal to improve its dividend coverage and enhance its revenue and earnings growth profile.

The merger is subject to approval by Time Warner Inc. shareholders and review by the U.S. Department of Justice. AT&T and Time Warner are currently determining which FCC licenses, if any, will be transferred to AT&T in connection with the transaction. To the extent that one or more licenses are to be transferred, those transfers are subject to FCC review. The transaction is expected to close before year-end 2017.