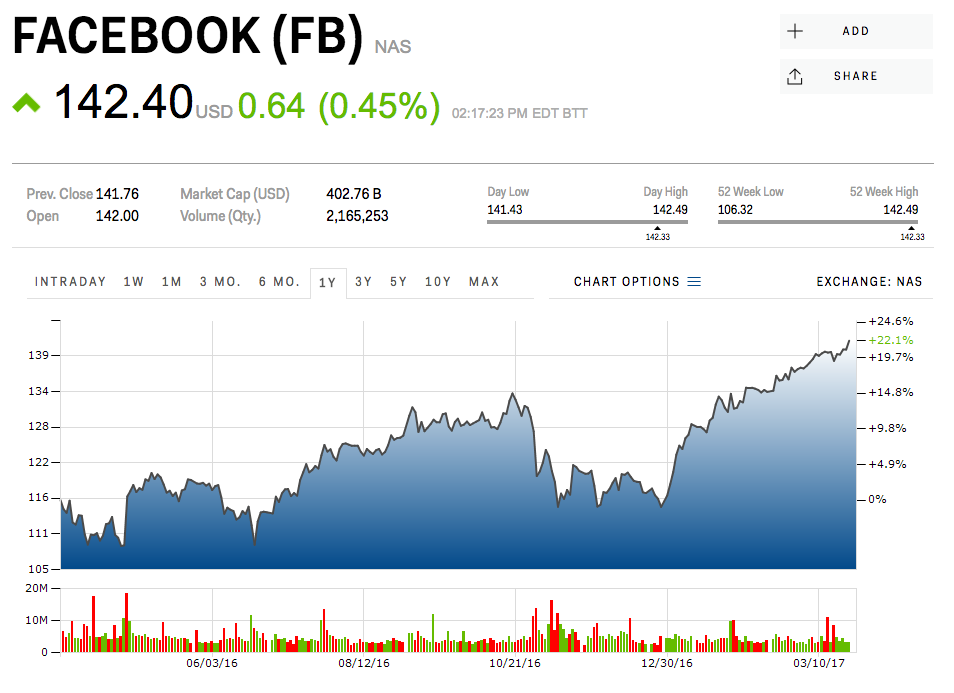 Facebook’s stock price is up again this week after announcing features that mimic those of Snapchat.

In another piece of good news, Barclays has named Facebook the “best pure play in consumer Internet around the secular growth in mobile advertising, full stop.”

Analyst Ross Sandler and his team released a note on Facebook March 29 with an “Overweight” rating and a $154 price target, implying a potential 9.5% increase.

Sandler thinks that the next 3-5 years will be the “golden age” of mobile, with the rapid transition of all things moving from desktops and laptops to mobile devices.

This shift is already well underway, especially in emerging markets where most users never had a desktop to begin with.

Barclays suggests that the next step is to fulfill Facebook CEO Mark Zuckerberg’s 2016 vision, “mobile first to video first.” According to Sandler, this transition should drive up the company’s unit ad prices and the amount of time users spend on Facebook.

For now though, Barclays thinks that Facebook’s Newsfeed remains its most advantageous feature, as it’s responsible for 95% of all Facebook’s revenue. The analysts added:

“Facebook’s revenue model is today primarily dependent on maintaining engagement in the newsfeed, both on desktop and mobile. There are other locations in the core Facebook app that could have ads, but unlike the newsfeed few have the combination of high traffic volume and a good native ad experience (Video and Groups possibly the exceptions).”

Facebook claims that there is not much room left for more ad space. While Barclays disagrees with that, the bank does agree with the social media giant that user engagement and growth is more important than increasing revenue at this time.

Barclays recognizes that there is a ceiling to Facebook’s mobile advertising success: 2016 was a big year for Instagram. The subsidiary recently disclosed that it has 1 million advertisers, already a quarter of what Facebook has. That number is up from just 200,000 in February 2016. As a result the bank says:

Barclays says that Facebook Messenger and WhatsApp will be Facebook’s “second act.” The bank sees $11 billion in additional value by 2020.