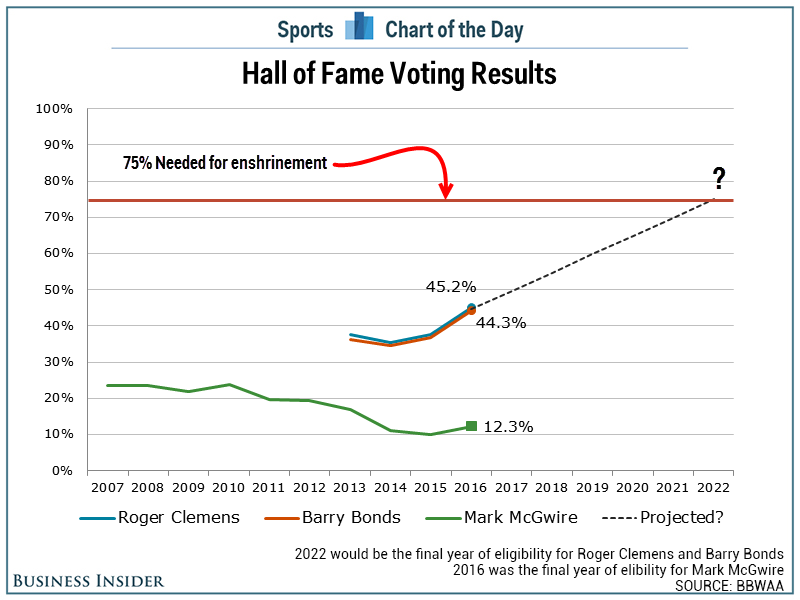 On Wednesday the Baseball Writers Association of America announced that Ken Griffey Jr. and Mike Piazza had been elected into the Hall of Fame. More interesting may be the sudden up-tick in votes for the two poster-children for Major League Baseball’s steroid era, Barry Bonds and Roger Clemens.

Clemens on Bonds, who have both received similar levels of support since first becoming eligible for the Hall of Fame in 2013, saw a decent increase this year, with Clemens being named on 45.2% of the ballots and Bonds’ name being included on 44.3% of the ballots. Meanwhile, Mark McGwire, who has admitted to using steroids in his career and was a borderline candidate anyway, received just 12.3% in his tenth and final year of eligibility.

While Clemens and Bonds are still well short of the 75% needed for induction, this year’s vote suggests it might still happen. Both players have seen their vote total jump about 10% in the past two years combined. At that same rate, both players would land right at ~75% in their final year of eligibility (2022). And if this year’s ~8% increase is any indication, they will hit 75% sooner than that, possibly in 2020.