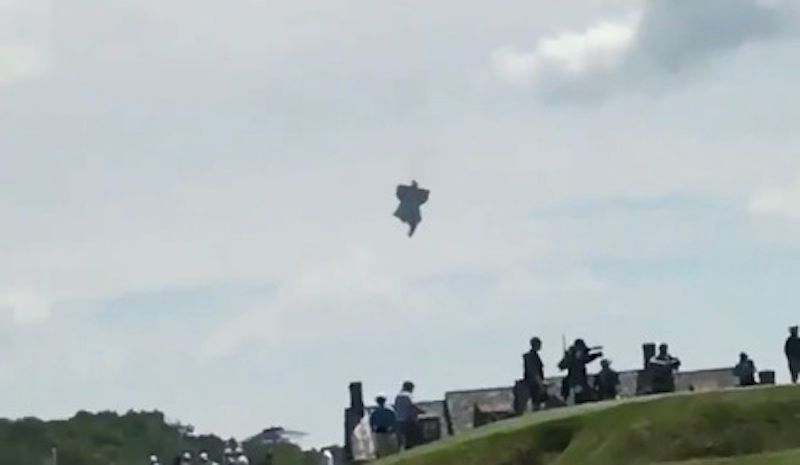 Based on reports and video evidence from the scene, a blimp just crashed at Erin Hills golf course, the site of this year’s U.S. Open.

One reporter on the scene claims to have seen the pilot parachute out of the blimp before it crashed:

Earlier today, a company called PenFed was promoting the fact that their blimp would be flying over the U.S. Open. We’ll update this post as more information becomes available.

Update (4:59 p.m.): ESPN is now reporting that the pilot, identified as Trevor Thompson, did not parachute out of the blimp but instead “rode it to the ground” while wearing a fire-retardant suit. Thompson suffered burns on his back and neck, and was pulled to safety by crew chief Matt Schmidt before the wreckage exploded. From ESPN:

“I heard him calling out for help when I got there,” Schmidt told ESPN. “He was able to get out of the gondola and he was probably 5 to 10 feet away from [the blimp] trying to call away. I asked him if he could move, and he said he couldn’t get up and walk. I pulled him as far away as I could and as fast as I could. I got 50 feet away before the first tank exploded, and then I pulled him about another 60 feet away before the second one exploded.”