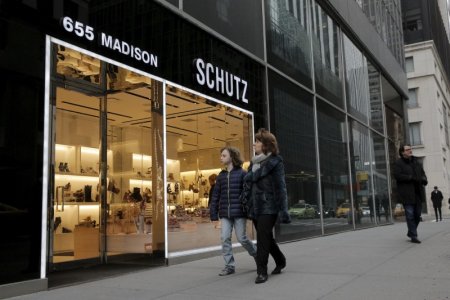 Thomson ReutersPeople walk past the Arezzo and Co.’s Schutz store on Madison Avenue in New York

By Brad Haynes and Cesar Bianconi

SAO PAULO (Reuters) – Shoemaker Arezzo&Co is fighting for a bigger share of the cutthroat U.S. market, a place many other Brazilian manufacturers fear to tread, with a flagship Los Angeles store opening next month and a planned nationwide rollout in 2017.

Arezzo, which already has a Schutz store on Madison Avenue, is going against a tide of dwindling manufactured exports from Brazil that has afflicted even its once-booming shoemakers.

Years of overheated inflation and an overvalued currency meant few Brazilian companies could take on rivals in the world’s largest economy.

But crashing raw material prices have plunged Brazil into a deep recession and weakened its currency to record levels, from 1.60 per dollar in 2011 to 3.60 per dollar this week, opening a window of opportunity in Birman’s eyes.

“In clothing, there’s no way Brazil can compete with China, but we’ve got a shot with shoes,” said Birman, who cut his teeth in the American market before taking over the family business.

“In fashion footwear, we’re competitive with China at 3.50 per dollar.”

Schutz will open a Beverly Drive, Los Angeles location on April 19 with a coterie of fashion bloggers in attendance. The brand is aiming for a niche between Chinese imports that cost less than $100 and European heels running north of $250, Birman said.

“We don’t see a clear leader in U.S. footwear retail today, like Nine West used to be,” Birman said, referring to the shoe company whose bonds have tumbled since a 2014 leveraged buyout by private equity firm Sycamore Partners. Nine West did not respond to a request for comment.

After the Los Angeles opening, Birman plans another U.S. store this year to gauge demand for Schutz in upper-middle-class malls. The company has mapped about 30 such locations for a full U.S. rollout in 2017 if all goes according to plan.

The U.S. expansion comes as Arezzo sales have stagnated in Brazil due to the worst recession in decades. Birman said domestic sales are flat so far this year, dodging a double-digit drop in wider retail sales, as Brazilians that used to buy luxury heels overseas are trading down to local footwear.

Arezzo is committed to a net cash position as part of its five-year plan, Birman said, as the company avoids double-digit interest rates in Brazil and gives itself flexibility to invest.

A focus on foreign markets has already boosted combined export revenue from Arezzo’s four brands by 67 percent in 2015 and Birman expects similar export growth this year, contributing up to 13 percent of net revenue. A third of exports are U.S.-bound, between Schutz retail, department stores and e-commerce.

The Schutz brand may be new to the U.S. market, but the man behind it is no stranger.

At 18 years old, Birman launched his own shoe company, the original Schutz, and within a decade it was exporting about half of its output from a factory in southern Brazil, much of it as private-label production for the Aldo Group. When Arezzo decided to open its first U.S. Schutz retail location on Madison Avenue in 2012, Birman took a sabbatical to oversee the move.

The Schutz U.S. stores are supplied by dedicated design and production teams in southern Brazil that can turn around a new pair of pumps in a month, tracking new trends faster than Chinese operations that can take three times as long.