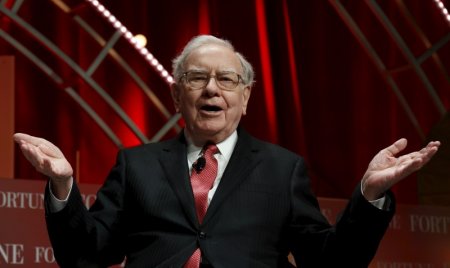 Thomson ReutersWarren Buffett, chairman and CEO of Berkshire Hathaway, speaks at the Fortune’s Most Powerful Women’s Summit in Washington

(Reuters) – Warren Buffett’s Berkshire Hathaway Inc
on Monday said it has increased its ownership stake in Wells Fargo & Co to 10 percent, a level that could mean increased federal scrutiny over the investment.

Berkshire owns 506.3 million shares of Wells Fargo, worth about $24.7 billion, mainly through subsidiaries, according to filings with the U.S. Securities and Exchange Commission.

Berkshire has paid close to $13 billion for its Wells Fargo shares, based on Buffett’s shareholder letters and the bank’s recent stock price.

Wells Fargo is based in San Francisco, and is the third-largest U.S. bank by assets. A spokesman did not immediately respond to a request for comment.

In a September 2008 policy statement, the Fed said it often lets investors take double-digit bank stakes not designed to exert a “controlling influence,” but would review any resulting business relationships “case-by-case.”

The U.S. Treasury Department, meanwhile, has said it will not deem a 10 percent stake to result in “control” of a bank if the investor agrees in writing to limits on its involvement.

In one of Monday’s filings, Buffett certified that Berkshire’s Wells Fargo shares “were not acquired and are not held” with the intent of changing how the bank operates.

Berkshire also owned a 15.6 percent stake in American Express Co as of Dec. 31. It operates close to 90 businesses including the Geico insurer, the BNSF railroad, various utilities and Dairy Queen ice cream.

Wells Fargo shares closed down 20 cents at $48.70 in Monday trading on the New York Stock Exchange.