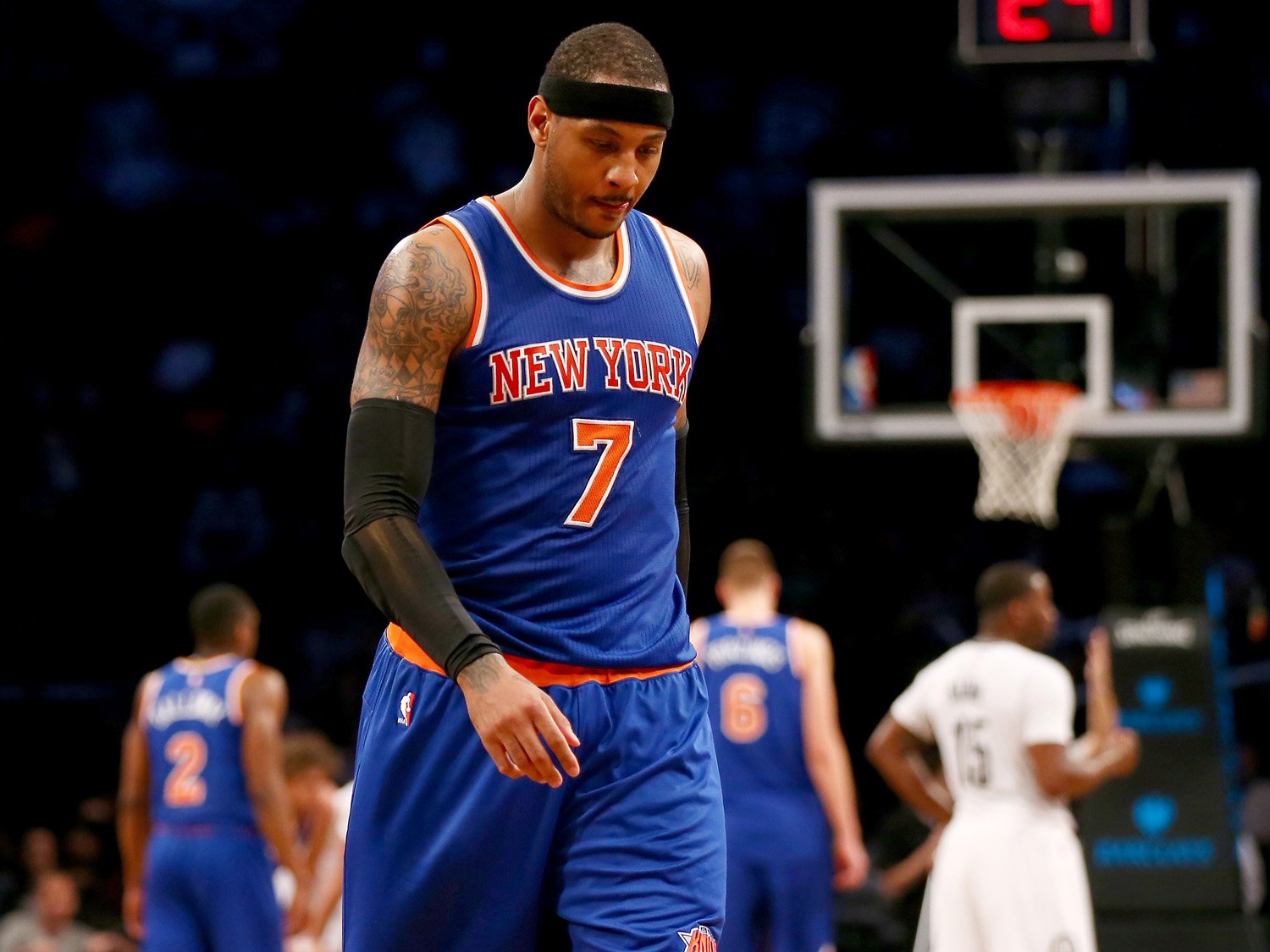 After a promising start to the season, the New York Knicks are cruising to another losing record and postseason absence.

Having lost 15 of their last 18 games, things seem to be getting dark around the team, particularly Carmelo Anthony, whose frustration has become evident.

During a loss to the Trail Blazers on Tuesday night, Anthony reportedly took a shot at a heckling fan sitting courtside:

Carmelo Anthony told a fan seated near James Dolan who was heckling him: “Look, the owner’s right there. Ask for your money back.”

Anthony explained further after the game (via ESPN’s Ian Begley):

“He kept calling my name, calling my name, saying, ‘You guys suck, you guys suck.’ At that point, I was trying to gather myself, and I turned around. All I did was point at Dolan and told him, ‘Look, the owner’s right there. Ask for your money back.'”

On Wednesday, Anthony issued an apology for his actions:

However, after Knicks practice on Thursday, Anthony sounded less-than-sincere about the apology:

Carmelo said “the Knicks” prompted him to release the statement about fan exchange. Then added it was “mr. Dolan’s decision” to release it.

While that may seem like a small acknowledgment, for Anthony to admit the issued apology was forced upon him by Dolan and later saying he didn’t think he did anything wrong is a pretty big deal. It’s rare to see athletes in any sport call out their team owner.

In what’s become another lost season for Anthony, it seems as if he’s reaching his breaking point.

After a recent loss, Anthony only briefly spoke to media then went home for what he said was alone time to decompress. After a loss to the Miami Heat on Sunday, Anthony said he had his head in his towel at the end of the game “just trying to breathe, just try to relax, kind of gather myself a little bit at that point.”

Aside from the Knicks’ on-court struggles, Anthony was involved in trade rumors over the All-Star break, though obviously nothing materialized. Still, trading Anthony has always been a tricky subject, as he has a no-trade clause (he must approve any trade before it goes through), and it’s been something of an unknown whether he would waive it to join another team.

Following his public statements about Dolan — again, it’s rare for athletes to even discuss team owners, never mind say they forced them to issue an apology to a fan — would Anthony reject a trade to another team? Furthermore, how accepting will Dolan be of Anthony’s comments, which while not wholly critical, do seem pointed?

The Knicks can’t trade Anthony until the end of the season, and, of course, he has to approve any potential trade. Phil Jackson reportedly runs the show at MSG now, but it will be interesting to see how Anthony’s comments sit with Dolan, particularly after another losing season. How involved Anthony’s name is in trade rumors in a few months may say a lot about the environment within the Knicks.