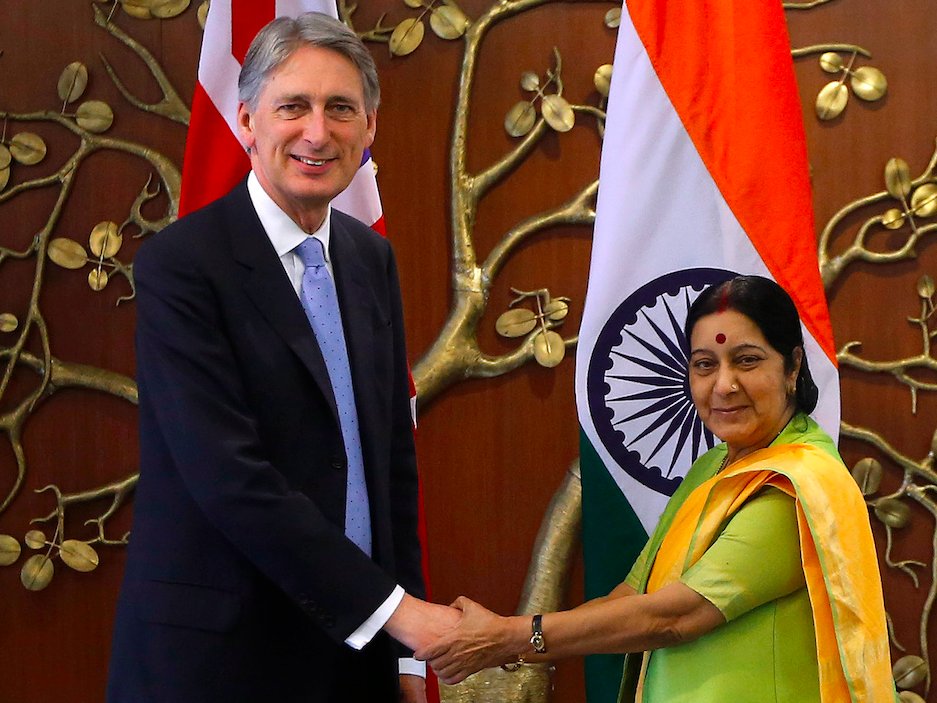 Phillip Hammond shakes hands with Indian Minister Sushma Swaraj during a visit in 2015, when Hammond was foreign secretary.REUTERS/Adnan Abidi

The talks are set to focus on trade between the two nations, as Britain attempts to establish itself as “a truly global” player after Brexit. Hammond said in a statement: “As we prepare to leave the European Union, it is more important than ever that we strengthen our relationship with India, one of the world’s leading economies and one of our oldest friends and allies.”

Government officials are particularly keen to promote British fintech — financial technology — abroad. The policymakers will be accompanied by a delegation that includes over a dozen representatives of the fintech sector, including:

The entrepreneurs will be travelling alongside more traditional finance executives, including Lloyd’s of London chairman John Nelson and Chris Davies, the CEO of HSBC International. Their interests will also be promoted. But the invitation of fintech startups represents symbolic support for one of the UK’s most exciting new industries.

City Minister Simon Kirby told Business Insider earlier this year that the government is “absolutely committed to fintech” and said it “will be doing as much as we can, as a government, to support it.” The Treasury is hosting a week long fintech summit in London next week.

Hammond is set to visit Indian fintech startups in Mumbai during the trip and speak at a UK-India fintech conference. Barclays will also announce a new UK-India Fintech Exchange Programme during the trip, offering three fintech start-ups from both the UK and India the opportunity to travel to each other’s country and receive mentorship.

“India has a growing consumptive market for fintech, with half of its 1.3 billion population under 25, the growth of mobile wallet applications, identity management, and world-class technology like the open API IndiaStack. This is an area of the world to watch closely.”

Baroness Neville-Rolfe, the commercial secretary to the Treasury, said in a statement she is “delighted that we are deepening our collaboration in fintech to advance cooperation in this fast-growing sector.”

The FCA’s regulation of the nascent fintech industry is regarded as world leading and Bailey will be helping to foster cooperation with Indian regulators on the topic during the visit.

Fintech has exploded globally in the wake of the financial crisis, with scores of startups springing up applying new technologies to everything from lending and credit scoring to core banking and clearing. London has become a particular global hot spot.

Current Chancellor Hammond has continued the support, publically praising Funding Circle and Nutmeg, two London-based fintechs, during their funding rounds. He has also called the UK a “global fintech capital.”

The government will be hoping this week’s visit is more successful than Theresa May’s visit to India last year. Trade talks stalled around the issue of visas, with Indian Prime Minister Modi demanding the UK relax restrictions for Indians hoping to migrate to the UK. This is problematic for May, who has pledged to reduce immigration post-Brexit.

At a Brexit conference on Monday, former business and trade minister Sir Vince Cable mocked attempts by the government to foster post-Brexit trade links with countries like India, saying: “We are not going to revive the empire.”