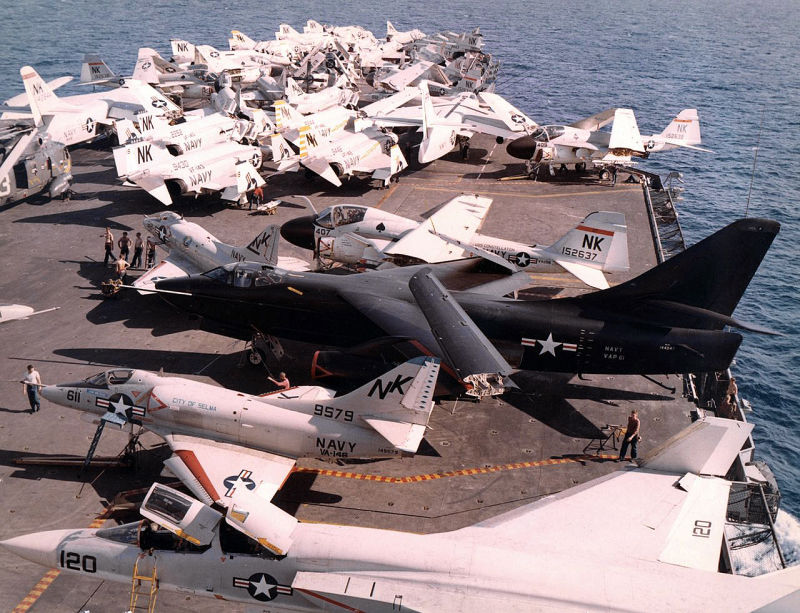 It is always interesting to look at the Carrier Air Wings of the past. Today America’s super carrier decks look far more homogeneous, with variants of the F/A-18 Hornet doing all the fixed-wing tactical work.. The photo above is shot aboard the USS Constellation in 1967, at the height of the Vietnam War, and it shows a very eclectic mix of aircraft.

The USS New Jersey, one of the great Iowa Class Battleships, was reactivated in the late 1960s to… Read more Read more

The most ominous of aircraft pictured is the giant RA-3B Skywarrior, also known as the Whale, painted in a rare matte black scheme. The RB-3Bs were used as reconnaissance aircraft, providing detailed maps of Southeast Asia and keeping track of Vietcong troop movements along the Ho Chi Minh trail. Because these missions utilized infrared equipment and were often flown at night, the black paint helped make the big RB-3Bs blend into the night sky.

A massive RA-5C readies for launch off the Constellation’s #2 catapult during the ship’s 1967 cruise. The sleek Vigilante looked uncomfortable sitting on the ground.

Just in the foreground of the same photo is one of the most beautiful and largest aircraft to ever grace American aircraft carriers’ decks on an operational basis, the RA-5C Vigilante.

These aircraft provided a variety of fast-jet reconnaissance products, including side-looking airborne radar (SLAR) imagery and electronic surveillance. Yet the “Viggie” was probably best known for its daring bomb-damage assessment (BDA) runs.

During these missions, the RA-5C had the extremely dangerous job of flying over or near targets that had just been attacked to see if they were indeed damaged or destroyed. Without this imagery, more lives would have been risked to go after a target that may have already been obliterated. Yet the fact that the enemy’s defenses are all on high alert and looking for vengeance meant that the Vigilantes were often flying into a hornets nest of enemy activity. Eighteen RA-5s were lost in combat; many those losses occurred during these high-risk missions.

In this image A-4 Skyhawks can also be seen, one of which is in the foreground and named “City of Selma.” The A-4 is absolutely dwarfed by the Vigilante and Whale parked nearby, and the comparison gives a great sense of just how huge these two aircraft were.

The A-4 Skyhawk, also lovingly known as the “Scooter,” was one cost effective little… Read more Read more

One of CVW-14’s F-4s is hurtled off the ship from one of the Constellation’s waist catapults during the ship’s 1967 cruise. The Phantom’s multi-role capability is displayed in this mixed load-out of Mk 82 Snakeye bombs and AIM-9 Sidewinders.

F-4 Phantoms make up the fighter contingent of the Connie’s Air Wing in this photo, with A-6 intruders providing all-weather strike capability. Radial engine powered A-1 Skyraiders can also be seen in the image which were used in the “Sandy” combat search and rescue air support role. More A-3 Skywarrior variants, most likely EKA-3B tanker/jammers, are also visible along with a sole SH-3 Sea King helicopter.

As with so many military aircraft designs, the A-6 Intruder, known originally as the YA2F-1, had… Read more Read more

So, just to recap, Carrier Air Wing 14 (CVW-14) deployed aboard the USS Constellation in 1967 included the following aircraft, a couple of which are not pictured in the photo above:

With this in mind, it is amazing what America’s carrier force of yesterday was able to pull off considering how tight space was on these ships and that there was no computer automation available to help make anyone’s job any easier.

Just operating fast jets that utilized mainly 1950s era technologies from an aircraft carrier, especially under adverse weather conditions, is an amazing feat. Yet keeping such a wild hodgepodge of aircraft in the air that rely on this same technology is just bewildering.

The USS Constellation pulls back into San Diego in December of 1967 after eight months at sea.

During the Connie’s 1967 cruise, she spent time executing extremely high-tempo operation from Yankee and Dixie station, and her F-4B squadrons accounted for four MiG kills. In all, the eight month cruise ended with 16 aircraft and 20 personnel lost.

Photos pictured in this piece were all taken on the Constellation’s 1967 cruise. Credit US Navy