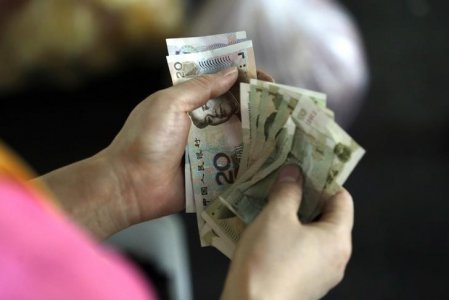 SHANGHAI (Reuters) – China’s central bank held the line on its yuan for a fourth straight session on Wednesday while putting the squeeze on offshore sellers of the currency, dampening fears of a sustained depreciation – at least for now.

Investors globally seemed to welcome the stabilization, bidding up equities and yuan proxies such as the Australian dollar while knocking back the safe-haven yen.

The People’s Bank of China (PBOC) set the mid-point for the yuan at 6.5630 to the dollar , virtually unchanged from firm fixes on the previous two days.

The central bank has also used aggressive intervention to engineer a huge leap in yuan borrowing rates in Hong Kong, essentially making it prohibitively expensive to short the currency.

The result has been to drag the offshore level of the yuan back toward the official level, closing a gap that had threatened to get out of control just a few days earlier.

Perceived mis-steps by the authorities had stoked concerns Beijing might be losing its grip on economic policy, just as the country looks set to post its slowest growth in 25 years.

Domestic equity markets reacted with only modest gains. The Shanghai Composite Index added 0.2 percent and the CSI300 index 0.1 percent. Both were still down around 14 percent for the year so far.

They also face a new hurdle in the shape of trade data, usually released around 0200 GMT. Recently the yuan trade numbers come first followed as much as an hour later by figures in U.S. dollars.

Further falls in exports and imports are widely expected but any downside surprise could shatter the market’s fragile peace and send stocks sliding anew.