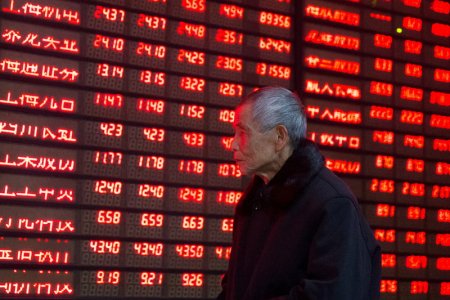 SHANGHAI (Reuters) – China’s volatile stock markets were flat early on Wednesday, as mounting chatter about imminent policy stimulus provided support against the backdrop of a fresh slide in oil prices that hit stock markets across the globe.

Wall Street had already seen its attempted rally swamped as U.S. crude sank beneath $28 a barrel for the first time since 2003, hammering energy stocks and boosting safe havens.

Chinese shares seemed to be faring better for once with the benchmark Shanghai Composite Index recouping modest early losses to stand just 0.1 percent lower. That followed a 3.25 percent bounce on Tuesday.

Likewise, the CSI300 index of the largest listed companies in Shanghai and Shenzhen was just a whisker weaker, having risen 2.95 percent the previous session.

The People’s Bank of China (PBOC) seemed to be succeeding in deterring yuan sellers, at least for the moment, and fixed the currency at a firm 6.5578 per dollar .

A raft of new regulations have seen yuan trading volumes fall off sharply, and the gap between its onshore level and offshore valuations has narrowed.

Late on Tuesday, the central bank announced it would inject more than 600 billion yuan ($91 billion) into the banking system to help ease a liquidity squeeze expected before the Lunar New Year in early February.

Such a move is usual before the holidays and stopped well short of an actual cut in bank reserve requirement ratios (RRR).

Still, analysts assume an easing is only a matter of time given soft readings on industrial output and retail sales for December, a sorry bookend to a year when the economy grew at the slowest pace in a quarter of a century.

China’s woes combined with the slump in commodities to prompt the International Monetary Fund to cut its global growth forecasts again on Tuesday. It warned the world’s second-largest economy would see growth of only 6.3 percent in 2016.

The government-backed China Securities Journal reported that Beijing had the policy space for further easing to support the economy, including raising deficit spending to around 3 percent of annual economic output.

“We continue to look for two 25 basis-point benchmark rate cuts in the first half of the year, and maintain our forecast of two RRR cuts.”

(Reporting by Pete Sweeney, Samuel Shen and Shanghai and Beijing newsrooms; Writing by Wayne Cole; Editing by Will Waterman)