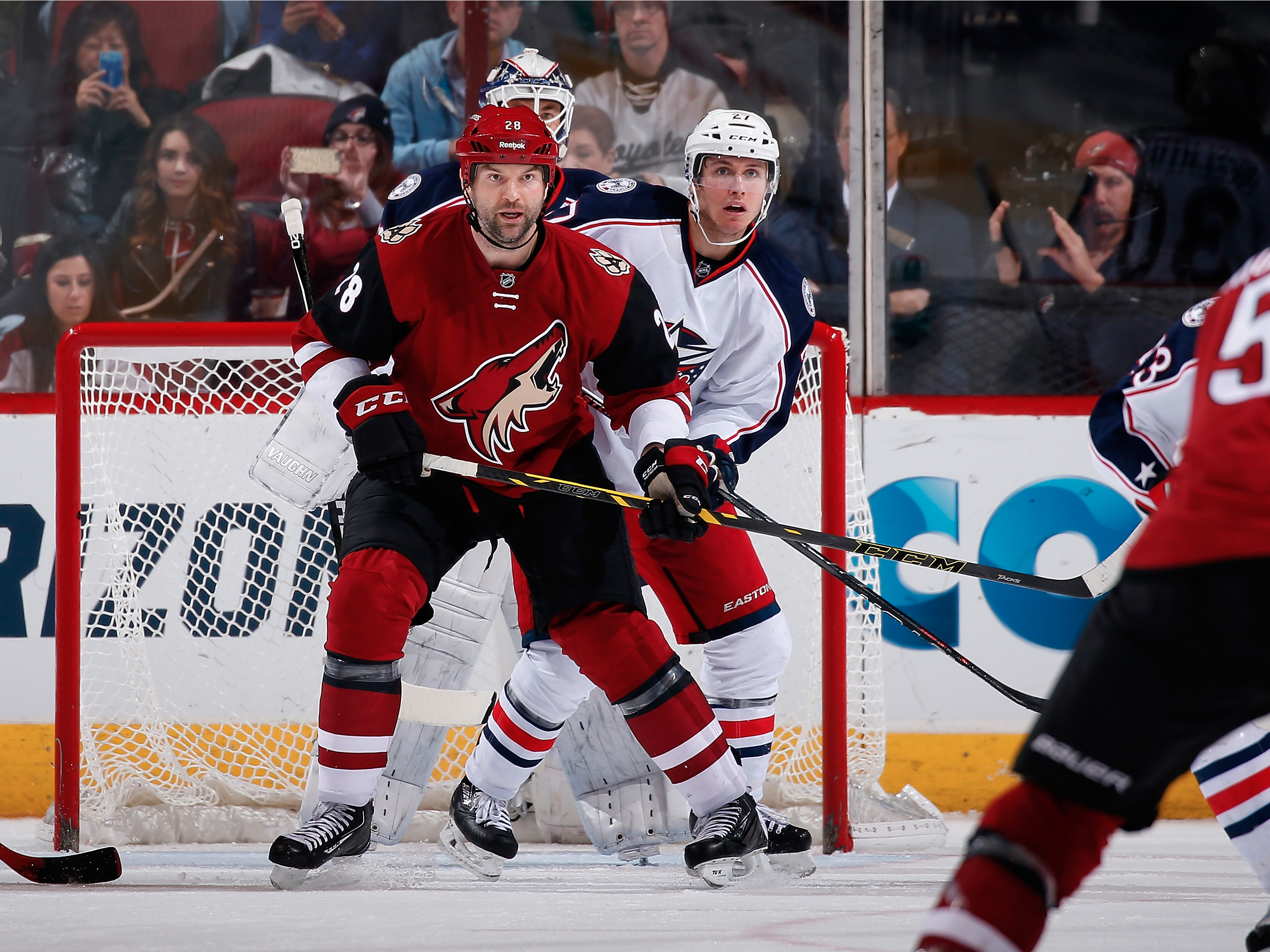 Getty/Christian PetersenJohn Scott #28 of the Arizona Coyotes sets up in front of Ryan Murray #27 of the Columbus Blue Jackets during an NHL game in December.

A largely unknown hockey player is going to be a captain at next week’s NHL All-Star Game — and he’s not even in the NHL.

Responding to enormous fan pressure, the league announced Tuesday that journeyman hockey player John Scott will get to keep his fan-voted spot on the all-star roster, even though he was demoted to a minor league team last week.

Scott was unexpectedly named the winner of the All-Star Game’s fan vote earlier this month, thanks to a well-organized Internet campaign publicized on sites such as Puck Daddy and Reddit’s hockey forum.

“I am looking forward to enjoying a fun and unique experience at All-Star Weekend in Nashville with my family,” Scott said in a statement released by the NHL. “While being voted to the All-Star Game by the fans was not something I expected to happen, I am excited to participate in the All-Star events with my fellow players.”

Scott, who most recently played for the Arizona Coyotes, is a journeyman enforcer known more for his fistfights than his goal-scoring prowess. The 33-year-old has played for six teams in eight NHL seasons, scoring just 5 goals and logging 542 penalty minutes along the way.

For fans who participated in the campaign, the thought of the 6-foot-8 bruiser squaring off against the likes of Alex Ovechkin and Patrick Kane was too much to resist. The fact that Scott was waived by the Coyotes in December, making him team-less for the third time this season, didn’t change that.

The NHL didn’t seem to appreciate the humor, however. As the Scott campaign gained steam, the league broke tradition and began concealing the All-Star vote totals. By mid-December, the NHL removed links to the All-Star ballot — and all references to the game itself — from its website. And when Scott ultimately won the fan vote, the NHL buried the accomplishment in the 25th paragraph of a press release.

Last week, Scott was dealt in a three-team trade to the Montreal Canadiens, who promptly demoted him to the St. John’s IceCaps of the American Hockey League. TSN’s Bob McKenzie soon reported that the NHL had pressured Scott into sitting out the All-Star Game:

John Scott was previously asked by both NHL and Arizona Coyotes to bow out of NHL All-Star Game. He refused. Trade likely takes care of that

McKenzie: “His inclusion in this trade, in my mind, was absolutely orchestrated to solve the All-Star issue for the league.” #Habs#Coyotes

Fans began circulating a #FreeJohnScott hashtag, and were even pledging to boycott the All-Star Game before the NHL reversed course Tuesday.

In the statement, the NHL acknowledged that Scott’s “unique circumstance” required review, “the result of which was a determination to maintain the status quo for the All-Star weekend in order to preserve all parties’ pre-existing expectations, including Scott’s desire to participate.”

The only question now is what team Scott will represent during All-Star weekend — he’ll be captaining the Pacific squad despite playing for the minor-league affiliate of a team in the Atlantic Division.

John Scott tells Bob McCown he might wear – if allowed by NHL – a St. John’s IceCaps jersey at NHL all-star game. “That’s who I’m with now.”

This isn’t the first time the NHL has found itself at the center of an All-Star voting scandal. In 2007, the league purportedly manipulated the online voting results to deprive the Vancouver Canucks’ Rory Fitzpatrick of a roster spot.

Like Scott, Fitzpatrick was an unremarkable “grinder” who soared to popularity through an Internet-based campaign.