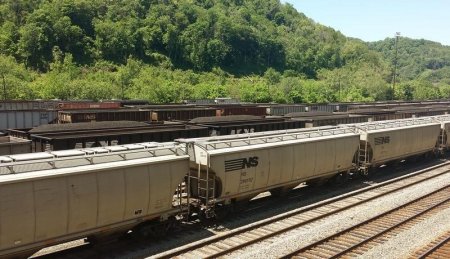 CHICAGO (Reuters) – A legal protest by Canadian Pacific over a meeting among big U.S. railroads about mergers in their industry has highlighted maneuvering in the sector to cope with a rapid downturn and possible consolidation.

Canadian Pacific Railway on Tuesday asked the U.S. Justice Department to look into statements by U.S. railroads, in the wake of the meeting, about “working closely with each other to block” its bid for Norfolk Southern Corp .

The U.S. railroads met late last year in the presence of lawyers, saying they merely discussed a merger’s impact on the industry. Interviews with U.S. railroad executives show some oppose mergers, others tout possible benefits.

Tuesday’s flap, where Canadian Pacific accused U.S. railroads of adopting an “anticompetitive” strategy, shed light on chances for further consolidation, with eyes on No. 3 U.S. railroad CSX Corp as a future target. “If Canadian Pacific’s bid for Norfolk Southern goes ahead, then CSX will be the next domino to fall,” said Scott Rostan, who worked on the Merrill Lynch team advising Norfolk Southern during its battle with CSX in the 1990s for control of Conrail, which was ultimately carved up between them.

The bid coincides with a “freight recession” as falling commodity prices hurt North America’s railroads. On Tuesday Moody’s Investors Service warned of “increasing risks of an industrial recession” for North American manufacturers. Canadian Pacific, like the broader Canadian economy, is fairly reliant on commodity exports. Some analysts see its Norfolk Southern offer as an opportunistic bid for a growth story while rail stocks are down.

The No. 4 U.S. railroad has rejected Canadian Pacific’s advances, setting the stage for a potential proxy battle. Union Pacific Corp chief executive Lance Fritz told Reuters last week consolidation would harm the industry and the No. 1 U.S. railroad has been lobbying lawmakers and regulators against mergers.

Asked whether Union Pacific would participate in consolidation of North America’s seven remaining major railroads, he said “we will act in the best interests of our shareholders.” Matt Rose, chairman of No. 2 U.S. railroad BNSF, owned by Berkshire Hathaway
, said now is not the time for mergers because “our customers do not want” them. But he added mergers would not necessarily be a bad thing.

“There’s nothing evil at all in having a transcontinental railroad,” Rose said on Thursday. “You’ve got lots of national networks in lots of industries.” Rose said if a Canadian Pacific and Norfolk Southern deal looks likely, BNSF will participate in further consolidation. Rose stressed if Norfolk Southern goes under the hammer CSX would be at a competitive disadvantage if the $1.8 billion in annual cost savings Canadian Pacific promises from a deal were borne out.

This would lead to a “final redrawing” of the continent’s rail map. “CSX would be at an enormous disadvantage and so there would be another step towards consolidation,” he said. BNSF, Union Pacific and Canadian National Railway Co would be seen as potential suitors for CSX.

A question is how the U.S. rail regulator would approach any proposed merger, as it must take into account other potential deals. Some analysts see CSX’s announcement Monday that it is consolidating some operating divisions and closing administrative offices as a proactive step toward remaining competitive. CSX did not respond to a request for comment. Independent rail analyst Anthony Hatch said CSX faces a dilemma if Canadian Pacific gets its way. CSX might be able to stand alone, but would lose value if it struggled. “I don’t think they could afford to take that bet-the-company risk,” Hatch said.