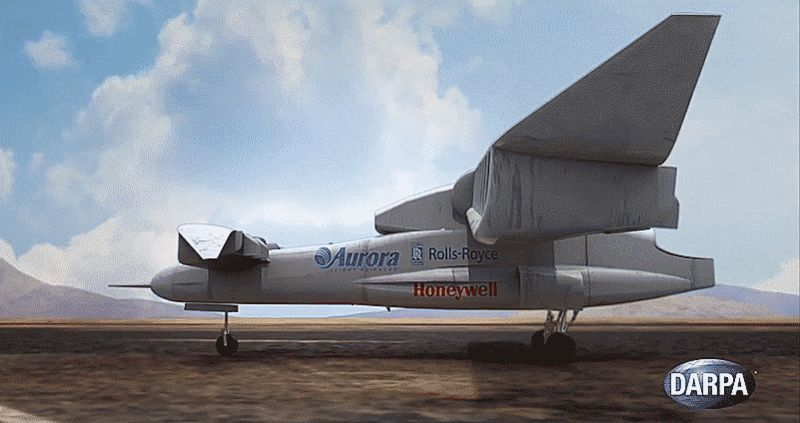 DARPA’s VTOL X-plane initiative takes a cocktail of totally innovative technologies and puts them together in one aircraft design that could very well solve some of the chronic limitations of vertical takeoff and landing capable aircraft. Oh, and it’s a design so radical it looks like something that may not be from this planet.

The program has been underway for some time now, but just today DAPRA announced that they have selected Aurora Flight Sciences to execute the second round of the contract which includes building fly prototype. This aircraft has been named LightningStrike.

Foxtrot Alpha talked to Ashish Bagai, the project manager on VTOL X-plane, and learned some interesting details about this totally unique aircraft.

LightningStrike will feature a pair of rear-mounted wings and two smaller canards mounted on the aircraft’s nose. The aircraft’s power will come from a single Rolls Royce T406 tuboshaft engine, the same type that is used on the V-22 Osprey. The engine will be mounted inside the fuselage and will pump out three megawatts of electrical power.

This avalanche of electrical output will be used in part to drive 24 ducted fans, each of which is integrated into its own custom-formed aerodynamic cell. These cells combine to make up the aircraft’s wings and the canards and are tailored to create lift during cruise and increase thrust during VTOL phases of flight. Each wing will include nine cells and each canard will have three. Both the wings and canards will rotate to direct thrust as needed, both rearward and forward as well as downward for hover.

The LightningStrike demonstrator planned to fly in 2018 is no toy; it’s a serious unmanned flying machine that seeks to reach sustained speeds between 300 and 400 knots and carry a useful load of 40 percent of its gross weight of around 12,000 pounds. Additionally, it aims to prove far greater efficiency than any VTOL aircraft flying today, with a lift to drag ratio of at least 10. The best existing VTOL aircraft, like the V-22 Osprey, have a lift to drag ratio of between 5 and 6. The technology demonstrator also aims to raise hover efficiency from around 60 percent for current VTOL aircraft to at least 75 percent.

Yet this aircraft concept has more to prove than enhancing raw performance statistics over existing VTOL craft. Its design and unique power system could have massive implications on the future of flight.

Instead of using a bunch of gears and transmissions hooked to a poweplant to turn rotors, it uses a distributed propulsion system that runs on electricity generated by the aircraft’s turbine engine. This “hybrid-electric” design is similar to that used on modern commercial ships and increasingly on the Navy’s own surface combatants.

The U.S. Navy is looking at ways to make their surface combatants less expensive to operate, and in … Read more Read more

By using electricity to drive individual ducted fans, the aircraft’s overall propulsion system design can be simplified and made significantly lighter. This technology also has the potential to greatly increase reliability and reduce maintenance requirements. It also allows for dynamic control of each engine cell in flight, with individual cells being able to be shut down during certain phases of flight, such as cruise, to increase range.

One day, this distributed propulsion scheme could also mean a whole new level of redundancy for aircraft. Although the program does not aim to prove this precise capability, further extrapolation of the concept could see a single propulsion cell, or even number of cells, that shut down in an emergency have others take over to compensate for their loss.

Although Lightning Strike does not have a battery component, battery power could one day take the place of a large power producing source. This is especially relevant for unmanned aircraft. This project could have a a huge impact on the future potential for all-electric aircraft designs.

The idea behind the whole VTOL X-plane initiative is not to put an aircraft into production or to fill a distinct mission set, but to rapidly mature and reduce risk on a package of technologies that could make their way to production aircraft in the not so distant future. And according to Bagai the technology is scalable, both up to much larger aircraft and down to small unmanned system. Clearly the tactical and commercial applications for a LightningStrike craft, that can land virtually anywhere while also being able to fly a near jet speeds are huge.

Ashish Bagai sums up this vision:

Imagine electric aircraft that are more quiet, fuel-efficient and adaptable and are capable of runway-independent operations. We want to open up whole new design and mission spaces freed from prior constraints, and enable new VTOL aircraft systems and subsystems.

Although vertical takeoff and landing aircraft have been around for the better part of a century, for Bagai and his team, it sounds like the real VTOL revolution has just begun.