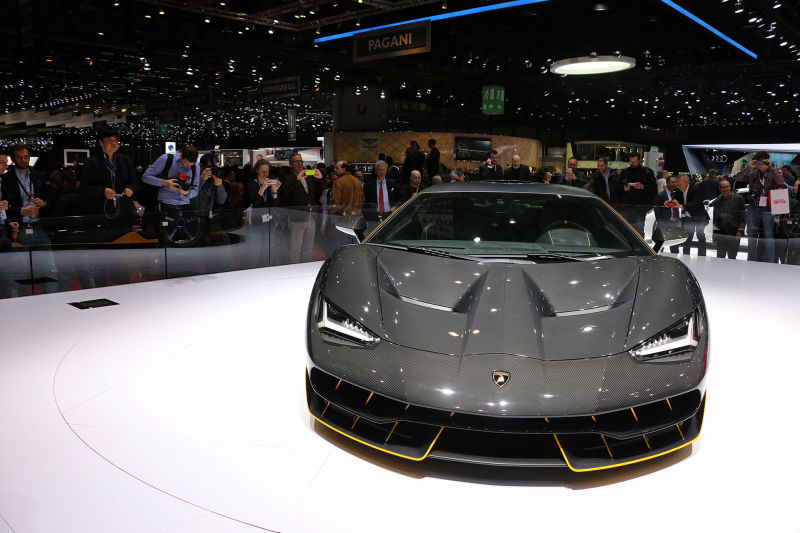 The Lamborghini Centenario is great. For starters, it’s got a 770 horsepower naturally aspirated V12. It’s also telling us that the Aventador’s successor will have four-wheel steering, and while Ferruccio Lamborghini would never care for its design, it’s actually the perfect tribute to Stephan Winkelmann’s triumphant 11 years at Sant’Agata.

This is the Lamborghini story like you’ve never heard it before: from the son of Ferruccio, Tonino… Read more Read more

Ferruccio Lamborghini would have been 100 years old on the 22nd of February, just a week before the start of the Geneva Motor Show. This gave Lamborghini a great opportunity to come up with another Aventador-based special edition, and that’s something they seem to like doing not only to wow the crowd and show Horacio Pagani at the next stand that they’ve still got it, but also because selling 20 coupes and 20 roadsters for many millions of dollars each isn’t half bad for business. Think Veneno.

You think you were excited about what Lamborghini was unveiling at Geneva? We talked to two of the… Read more Read more

While the Centenario has much cleaner lines than Lambo’s previous spaceship, it’s still far from being anything Ferruccio Lamborghini would approve of. And not just because the show car’s yellow accents are bordering on vulgarity.

Let’s go back in time a little, because I’m pretty sure Lamborghini wouldn’t like to talk about two minor facts when selling this as a Ferruccio tribute:

I completely forgot about the prototype 350 GTV (like Lamborghini themselves did back in the day),… Read more Read more

I read Top Gear’s ‘Big Interview’ with Winkelmann made after they announced his move to Audi, and his two favorite special Lamborghini projects happen to be my two favorites as well.

To him, the Reventón is special because it was the first limited edition, and it instantly changed the company. He said:

We took it to the U.S in August 2007 and pre-sold all the cars based on a scale model. It helped us recognize the potential of the brand without knowing it at that time.

Personally, I like it because it was done in a very charming way. They simply put all the Murciélago engines that produced more power on the dyno to the side, gave the flagship an all new carbon fiber body and a bonkers fighter jet interior, jammed those 650 HP V12s in the middle, and called it a day, asking $1.5 million for each in 2007. The SVs and those early Murcielégos are both great, but the Reventón is the slightly mad uncle everybody loves to hang out with.

Winkelmann’s other pick from his era is the all carbon Gallardo, the Sesto Elemento:

We didn’t build these cars for the museum or a private racetrack, but to go on public roads, and this was something which was not possible in the Sesto Elemento because of homologation. But even now, four or five years afterwards, we’re still getting requests for the Sesto Elemento.

If you need more explanation why a 2,202 pound car with an exposed V10 producing 570 HP felt like the sort of car Lamborghini should be making all they long, here’s a loud clue:

Five years on, Winkelmann is leaving the company before Lamborghini’s third model, the 2018 Urus SUV could hit the street. And he isn’t the only one.

The latest from Sant’Agata, the Huracan LP 610-4 Spyder, has got a soft top and a loud V10. It’ll… Read more Read more

Filippo Perini, Lamborghini’s Chief of Design is also gone, having moved on to head Italdesign. His successor is Mitja Borkert, who’s been working in Porsche’s design department since 1999.

What will Lamborghini do next apart from launching the world’s most extreme SUV and building a new V12 supercar with four-wheel steering, 800+ horsepower and Apple CarPlay? And how will their cars look after the company is run by an ex-Ferrari guy and its products get influenced by a Porsche veteran?

They will make a fast car you won’t mistake for anything else. For sure. And you shouldn’t worry about Ferruccio’s well-deserved tribute car either. It is called the Asterion, and it came two years early.

It’s exactly the sort of car Lamborghini’s founder had in mind when deciding to show Enzo Ferrari how it’s done.

There’s nothing wrong with Winkelmann getting a 770 HP tribute, and this naked carbon Centenario certainly feels like a fitting farewell to the man who made Lamborghini the powerhouse it is today without letting parent company Audi take away too much, if any from the Italian’s traditional lunacy.

On his first day at Audi, he should be smiling, thinking that his most cherished project, the Aventador will be able to keep up with beefed up Quattros all day long for quite some time. It’s not a bad car to have on your CV.