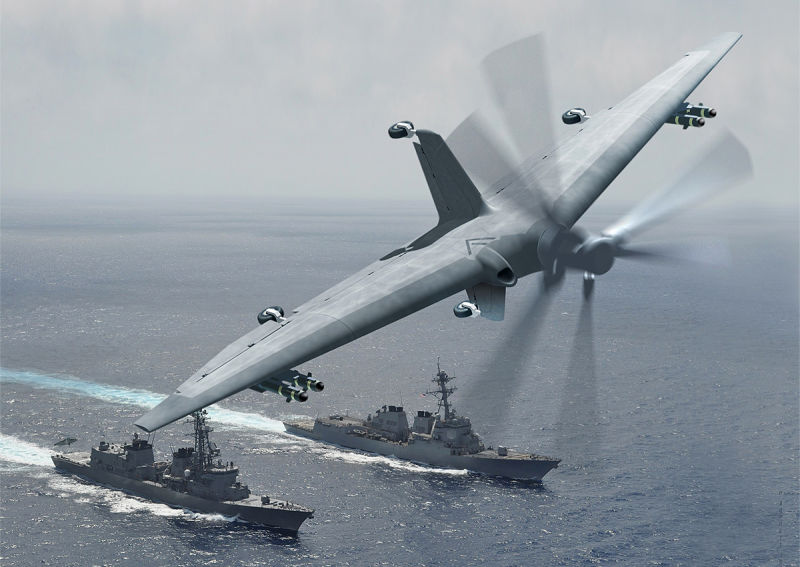 Northrop Grumman scored another win this last year after its Tactically Exploited Reconnaissance Node (TERN) concept was tapped for full-scale demonstration. The DARPA and Office of Naval Research-led program seeks to give Navy surface combatants, like destroyers and Littoral Combat Ships, fixed-wing aircraft carrier-like capabilities, albeit on a smaller scale. It’s a move that could change naval warfare, and warfare in general, as we know it.

After a maze of programs and initiatives that lasted a decade-and-a-half, the U.S. Air Force has… Read more Read more

The idea of adding a fixed wing unmanned aircraft capable of taking off and landing vertically to bolster the sensor range and combat capability of destroyers, cruisers, littoral combat ships and other surface combatants is nothing new. I predicted it would be a future must-have. Now this concept is set to mature into the demonstration phase, similar to that of another Northrop Grumman product, the hugely successful, stealthy carrier-borne X-47B drone.

The Navy’s unmanned combat air vehicle demonstrator, the X-47B, not only plugged into a refueling… Read more Read more

TERN has evolved steadily through its first and second phase of development, none of which resulted in a full scale prototype, but that is now about to change as the program enters phase three. DARPA describes the program as such:

“The first two phases of Tern successfully focused on preliminary design and risk reduction. In Phase 3, DARPA plans to build a full-scale demonstrator system of a medium-altitude, long-endurance UAS designed to use forward-deployed small ships as mobile launch and recovery sites. Initial ground-based testing, if successful, would lead to an at-sea demonstration of takeoff, transition to and from horizontal flight, and landing—all from a test platform with a deck size similar to that of a destroyer or other small surface-combat vessel.”

In other words, TERN is becoming a real thing, not just an idea. And it primarily aims at giving small-deck surface combatants the ability to deploy a semi-autonomous fixed-wing drone, with long endurance, far from the ship.

Once there, it can work as a networking and sensor node, expanding the “sensor picture” and situational awareness of the ship by providing detailed reconnaissance, and being able to relay information to other players far over the horizon. But that is not all TERN will be capable of. Apparently it will pack some serious teeth as well.

The TERN initiative seems to have expanded from a information, surveillance and reconnaissance node to a shooting platform as well, with concept art showing the aircraft toting weapons capable of pinpoint strikes—the latest of which is shown at the top of this story.

This fits perfectly into the Navy’s increasingly high-priority movement to diffuse its combat capability over more assets and larger areas. This is known as Distributed Lethality, and it is becoming a very big deal on multiple levels within the halls of the Pentagon.

As far as TERN’s configuration and design goes, it will be a “tail sitter” reminiscent of the Convair XFY-1 Pogo of the 1950s—just with the benefit of almost seven decades of computer technology. The Pogo was very tough to land for pilots as they literally had to do so with their backs turned towards the ground. Trying such a thing on a pitching and rolling ship’s deck? Forget it.

But an unmanned aircraft should be able to accomplish this without much of a problem. Even Space X landed a rocket that had delivered a payload into orbit in a similar manner recently, so the engineering hurdles for doing something similar with a turbine power and highly maneuverable aircraft are not too high.

“The Tern Phase 3 design envisions a tailsitting, flying-wing aircraft with twin counter-rotating, nose-mounted propellers. The propellers would lift the aircraft from a ship deck, orient it for horizontal flight and provide propulsion to complete a mission. They would then reorient the craft upon its return and lower it to the ship deck. The system would fit securely inside the ship when not in use.

Ideally, Tern would enable on-demand, ship-based unmanned aircraft systems (UAS) operations without extensive, time-consuming and irreversible ship modifications. It would provide small ships with a “mission truck” that could transport ISR and strike payloads to very long distances from the host vessel. The solution would support field-interchangeable mission packages for both overland and maritime missions. It would operate from multiple ship types and in elevated sea states.”

Much like the X-47B before it, Northrop Grumman will now build TERN for ground and shipboard testing, proving the concept works before the Pentagon commits to bringing a design into production.

Clearly, the stakes are high. If TERN ends up fulfilling its potential, it could radically increase the combat flexibility of its host vessels. Additionally, it could be used aboard other types vessels, such as amphibious assault ships, to work as a companion to the USMC’s F-35B, taking on lower-end tasks and working as a data relay and translator between the F-35 and the “gator Navy” flattop that carries them into battle. We discuss the need for such a vehicle in this post from early 2014.

After years of passing more conventional capabilities by, I think it is time for the Marine Corps,… Read more Read more

This would allow Marine-centric flotilla to exploit the F-35B’s sensor capability by translating and relaying its proprietary MADL data-link waveform and language into one that the ships’ current data links can understand. This is being done today with other disparate platforms over the battlefields of Afghanistan and Iraq using a flying universal translator of sorts known as BACN. But BACN is not built to accommodate the F-35, nor is its hardware packed into anything that can operate off of a amphibious assault ship.

This satellite image was taken of Djibouti-Ambouli International Airport in September of this year. … Read more Read more

This is a major issue confronting the Navy and USMC right now as they know the F-35 is capable of greatly enhancing their ships’ sensor picture and situational awareness, but figuring out how to relay that data back to the ship over long distances, and fusing it with other information remains unsolved.

The F-35’s unique data link system and the fact that the Navy and USMC remain unprepared to take advantage of the jet’s information collecting capabilities are detailed in this previous Foxtrot Alpha piece.

The Navy’s USS America, the first of her class, was controversially optimized to handle the F-35,… Read more Read more

For use on other surface combatants such as destroyers and Littoral Combat Ships, TERN could accomplish a whole array of missions their embarked MH-60R helicopters cannot. This mainly includes long-range missions that require fixed-wing endurance and speeds to accomplish. For instance, TERN could work as a communications relay and weapons platform to provide armed overwatch for Navy SEALs operating on foreign shores while allowing its host ship to be many hundreds of miles away from that shore.

TERN, being the modular “flying sensor truck” that it is, could also be flown with a radar on-board capable of searching for surface targets in littoral environments, far outside of an cruiser or destroyer’s sensor range. A forward-operating TERN could relay targeting information of enemy ships back to its mothership and provide mid-course targeting updates for incoming missiles.

America’s primary anti-ship missile, the Harpoon, has been in service now for close to 40… Read more Read more

These types of long-range missions really play into the Navy’s need to develop tactics to deal with enemies that possess anti-access/area-denial (AA/A2) capabilities. TERN will allow U.S. Navy ships to standoff many hundreds of miles, outside the enemy’s reach in most cases, while still having a hand in the fight. TERN could also help dismantling the enemy’s AA/A2 capabilities by sniffing out and geo-locating the enemy’s anti-aircraft missile systems and other parts of its integrated air defense nodes.

Fit TERN with a air-to-air capable radar, such as smaller version of the Super Hornet’s APG-79 active electronically scanned array (AESA) radar, and the drone could provide engagement quality target tracks of enemy aircraft. These tracks could be data linked back to a ship that fires a missile toward the target without ever seeing it on their own radar. In the future, this data could even be forwarded to ships like the stealthy DDG-1000, or even a submarine equipped with anti-aircraft missiles. These assets could work as clandestine launch platforms while TERN works as the sensor platform that guides the missile towards its target.

Such a capability is only theorized today in the form of large unmanned air combat vehicles like an operational version of the carrier-borne X-47B. But being able to launch a similar, albeit more rudimentary, capability off the back of virtually any Navy ship leaves the enemy much more vulnerable to attack and makes our forces much less predictable. Once again, this leverages the distributed lethality concept.

TERN is also relevant when it comes to land-based operations. Being able to deploy such a capability off of a basketball court sized launch and recovery area opens up a whole new set of possibilities when it comes to forward-deployed unmanned aerial combat. Not only is such a system hard to detect because it relies on little infrastructure to operate from, but it could be adapted quickly to execute multiple missions. A set of say three of these vehicles could allow a small unit to have an aircraft in the air at all times, which is a lot of persistence and a lot of capability considering no runway is needed.

Currently the Navy has its long in development helicopter drones, the MQ-8 Firescout family of unmanned helicopters, but these systems will be overshadowed in the range and altitude department by TERN. That does not mean they are mutually exclusive. TERN and the Firescout would be a very capable team, with Firescout working the inner ring around the ship and TERN venturing out farther and higher. One could even see them working together for sea-control missions or even providing armed over-watch duties.

The vertical takeoff and landing nature of TERN may also make it an incredibly sought after capability for allied countries to acquire. Deploying such a system even on an aging ship could give that ship greatly enhanced abilities without investing heavily in the ship itself. Additionally, for countries like Taiwan, who fear that their runways may be cratered in the open exchanges of hostilities with China, and thus they could be blinded and cutoff from communications, TERN offers a relevant and survivable insurance policy.

Warfare is not the only medium in which TERN could be well worth the cost of acquisition. The Coast Guard has long sought a VTOL unmanned aircraft, TERN could finally be an answer to their dreams. It could bring C-130 like speeds and helicopter deployability to search and rescue efforts. When not looking for those in distress, TERN could map the movement of glaciers, study fish populations and provide other key environmental data, all off the back of a ship.

TERN represents a fascinating technology that could revolutionize naval combat capabilities on many different levels, and migrate inland to solve other tactical problems and provide solutions to problems that have not even been identified yet. Even better, it is not a hard-wired technology like a new radar system that needs heavy modifications to a ship or a permanent base in order to be put to work. This makes it accessible and adaptable, which in itself represents value.