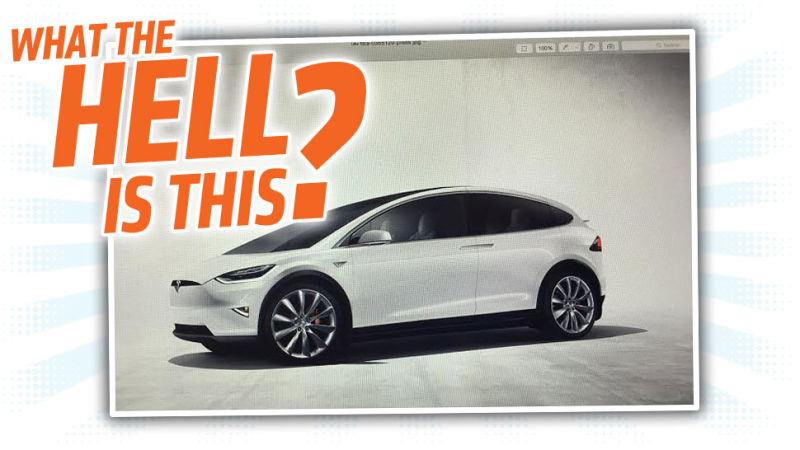 Last night, we got a very interesting email. It’s the sort of mail that, as a car journalist, you’re always hoping you’ll get, if I’m honest. It was from an anonymous person claiming, with evidence, to be a Tesla employee. The person wasn’t happy and they sent what they claimed to be was an upcoming Tesla crossover. And that’s when things started to get very strange.

We don’t actually think it’s a Model 3, or a Model Y, or really any sort of Tesla, for reasons we’ll get into. Tesla, for what it’s worth, is also completely denying that this is one of its images. But it’s opening up another can of worms entirely.

Here’s what the anonymous message from a Gmail account said:

I work at Tesla. I can’t stand the company and the management. Yeah, they’re doing good things, but they treat us like shit. I was able to access the attached image on my boss’ computer. This was risky as hell! The image quality sucks, but it’s better than nothing. Enjoy…

While everyone is very excited about the hopefully-around-$35,000 Model 3, it’s important to remember that the new Model 3 platform will actually spawn two cars: a Model 3 sedan, the one we’ll see in a few weeks, and a crossover/SUV-type variant similar to the Model X—possibly called the Model Y.

Our tipster said that is what we were supposed to be looking at here, shot off a Mac’s screen running the Preview image viewing application. (This shot has also started making the rounds on the Internet as a “leaked image,” though one that’s been met with much skepticism.)

We were deeply skeptical about this claim, so we followed up with the source to ask for more proof. He or she then sent us Tesla’s entire confidential employee directory, complete with phone numbers and emails for more than 800 people.

While we can’t confirm the possible ways one could get ahold of Tesla’s internal employee directory, officials said it is not available outside of the company, suggesting that whomever sent us this very likely has, or had, some direct connection or access to Tesla. (It is worth noting that this directory lacks at least some current known company employees.)

So the directory lent some credibility to the image. And the image itself is interesting, even if it is a hoax. What gave us pause was a reverse Google image search, which turned up this very common Model X press photo:

But our source elaborated, claiming:

Not a model X. It’s smaller by 18%. Compare for yourself (See attached). There will be multiple variants of the III. This is the crossover. As Elon said, its not going to look like other cars, which is clearly an understatement. Its my first time seeing it all dressed up. Gotta run, deleting this email account shortly.

They’re not identical, though the wheelbase is nearly the same, resulting in almost the same interior volume, but no 3rd row option. The reduction in overall length was achieved by reducing the overhangs at the front and rear. The cost target was achieved by mainly by sharing as many components as possible. This includes components inside the lighting fixtures, suspension parts, mirror assemblies, hinges, and more.

This supposed–Model Y mockup looks a lot like the X, which makes sense for several reasons: theywould wantto share many components, and Tesla has a specific corporate look they might want to preserve.

The packaging and design is also quite good, with a large interior volume for a relatively compact exterior package. Remember, with the engine under the floor in the rear, a (smaller here) luggage compartment is available up front, as well as the hatch area in the back.

But in the end, the photo just isn’t very convincing, and far too close to the stock Model X photo to believe.

If this were real, it might be some kind of would be an early Photoshop mockup of the Model Y, based on the press shot of the Model X.

I’ve superimposed the image sent to us with the original press photo of the Model X together here so the differences are more visible.

Other aspects of this claim don’t make sense. Modern-day designers tend to use computer aided design tools, not weird Photoshops of currently-existing models, for one.

So it could resemble the Model X simply because it’s somebody’s quick Photoshop made from a Model X press photo and sent out to either fool us, hurt Tesla, or both. Even the filename is tsla-0055129-press.jpg, which is awfully on the nose.

When we talked to Tesla, they stressed a few key points:

• We weren’t the only outlet to get this email and this image.

• Tesla claims it’s not a Tesla image, and it’s not one that came from them.

• They agreed it appeared to be a Photoshopped Model X press picture.

So who sent this out in the first place? If the image isn’t real at all, why would they be trying to trick us, and at least one other outlet? If they’re not really a Tesla employee, current or former, how did they get access to the company directory?

And why are they so mad at Tesla that they’d create such a big PR headache for them?