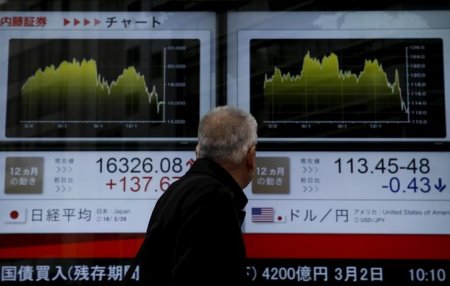 SYDNEY (Reuters) – The dollar rose for a fifth straight session on Thursday, pressuring commodities and Asian share markets after yet another Federal Reserve official talked up the chances of more than one increase in U.S interest rates this year.

If the dollar can keep its footing it will notch up the first weekly gain in a month against a basket of major currencies. [USD/]

St. Louis Fed President James Bullard joined a chorus of officials in highlighting the risk of at least two rate hikes this year, with the first perhaps as soon as April.

Markets imply only one increase and dealers suspect an orchestrated attempt by the Fed to shift that thinking.

“There is now some speculation on April, as Bullard adds to the relatively optimistic Fed rhetoric this week,”

“The focus now turns to Fed Chair Yellen who will be speaking at the Economic Club of New York next Tuesday, which could give further clarity on the matter.”

Yet for all the Fed’s chatter about multiple hikes, the market seemed far from convinced. Fed fund futures imply almost zero chance of a move in April and a rate of just 61.5 basis points by year end. The current effective funds rate is 37 basis points.

It was also notable that Treasury yields actually fell in response, with the 10-year back down at 1.88 percent from a high of 1.95 percent on Wednesday.

Still, the rise in the dollar sparked profit-taking in a range of commodities from oil to gold to copper.

Oil took a further knock when data showed crude stockpiles had risen by three times the amount expected in the latest week. U.S. crude fell a further 22 cents to $39.57 a barrel, after sliding 4 percent on Wednesday. Brent lost 12 cents to $40.35. [O/R]