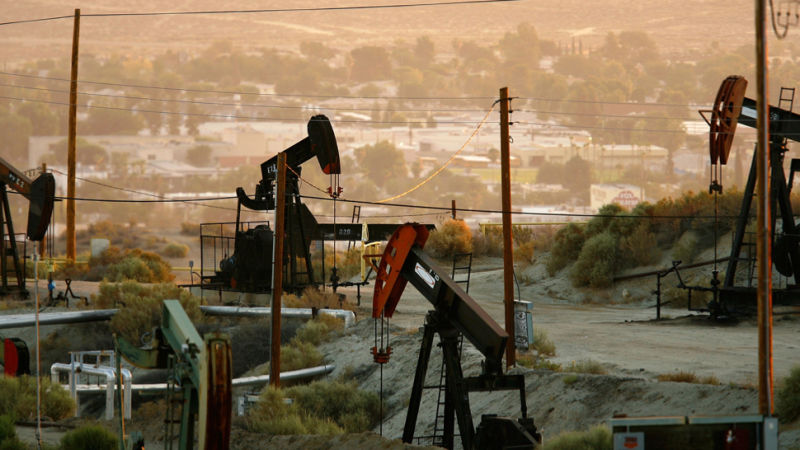 The price of a barrel of crude oil briefly jumped this morning, on news that Russia and Saudi Arabia (joined by Venezuela and Qatar) tentatively agreed to a cap on oil production. Don’t expect the price of your average gallon of gasoline to go up, however, thanks to an ages-old dilemma.

The price of a barrel quickly sank back down, but at issue is the rate of oil production, since global stocks of oil are practically bursting at the seems right now. If production was cut, oil prices might rise significantly from where they sit now, at the lowest they’ve been in a decade. But no one seems to be agreeing to such a reduction

It’s reminiscent of the Prisoner’s Dilemma, but at this point, it should be called the OPEC dilemma. The classic version, created in the 1950s by three game theorists, goes like this (thanks to Wikipedia, which lays it out much better than I can):

Two members of a criminal gang are arrested and imprisoned. Each prisoner is in solitary confinement with no means of communicating with the other. The prosecutors lack sufficient evidence to convict the pair on the principal charge. They hope to get both sentenced to a year in prison on a lesser charge. Simultaneously, the prosecutors offer each prisoner a bargain. Each prisoner is given the opportunity either to: betray the other by testifying that the other committed the crime, or to cooperate with the other by remaining silent. The offer is:

The crux of it is that if everyone agrees to one solution, all will benefit somewhat. But if one person cheats, that person will benefit enormously, and everyone else will get screwed over. The formal presentation of the dilemma does not include any mention of snitches getting stitches, which tends to complicate things.

There’s also no formal solution to the Prisoner Dilemma.

You have a similar situation when it comes to global oil production, particularly in the context of OPEC. In theory, oil-exporting countries should work like any other cartel, setting production levels across multiple countries and thus, global commodity prices. And, in theory, they should be able to set global oil prices at whatever they fancy.

But that’s obviously not the case as oil stays cheap, because the incentive to cheat is just too great. And it’s much worse than a standard Prisoner Dilemma, as the global stage doesn’t just have two participants named “A” or “B.” OPEC alone has thirteen participants, named Algeria, Angola, Ecuador, Indonesia, Iran, Iraq, Kuwait, Libya, Nigeria, Qatar, Saudi Arabia, the United Arab Emirates, and Venezuela. And that doesn’t even include Russia, third on the list of top oil producers. And it doesn’t include the world’s number one oil producer, the United States.

All of these countries have different agendas, and different internal price targets for oil. Countries like Iraq, Russia, and Venezuela want oil to be expensive, since the resource props up their relatively unstable economies. Countries like the United States want oil cheap, as cheap oil drivesAmerican infrastructure and industrial growth.

Saudi Arabia is more mysterious still, as it wants oil prices cheap enough to put American companies, which can rely on more expensive shale- and offshore- oil production, out of business. At the same time, Saudi Arabia doesn’t want oil prices so cheap that it damages an extraordinarily (and some economists would say dangerously) generous welfare state.

And therein lies the issue. A lot of people want gas prices to go up, but it needs agreement of a number of different parties, none of whom trust each other.

With all of these competing interests, none of the countries trust each other enough to come to a real, enforceable agreement on oil production. Russia and Saudi Arabia could sign all the agreements they want, sure. They might even get another country to hop on board as well.

But the second any one of the other signatories to such a deal cheats, the cheater gets massively rewarded. They pump out more and more oil, and the rest of the world’s insatiable thirst for fuel comes looking for it. And there’s no real recourse against a cheater when it comes to global politics.

And that’s assuming you could get anyone to agree to a production cut to begin with. Already, Iran is making noises about actually pumping more oil, not less, Reuters reports:

But buying quickly ran out of steam as investors weighed the chances of the agreement being sealed, with Iran absent from the talks and determined to raise production.

“A production freeze dependent upon the involvement of Iran seems a bridge too far at this juncture,” said Matt Smith, director of commodity research at New York-based ClipperData, an energy data provider.

So Russia and Saudi Arabia could cut all they want, but all they’d be doing is missing out on whatever money there is left, as Iran’s overproduction virtually guarantees lower prices. And as of this writing, the price of a barrel of oil is actually lower than what it was yesterday.

Of course, much of this is an oversimplification. A cut in the supply of oil won’t necessarily affect the demand side of the equation. China, the world’s largest oil importer, is facing a significant economic slowdown, and accordingly, its thirst for petroleum products has relented somewhat. A good number of countries just signed a massive global warming pact, seeking to cut emissions (and thus petroleum consumption), which should drive down oil prices in the future.

And for every electric car that’s sold, there tends to be one less on the road drinking gasoline. The impact so far is almost impossibly small, though it only promises to get bigger.

So will the price of oil go up over the next few months and years? It’s certainly possible. But you need a lot of people to get past a massive dilemma first.