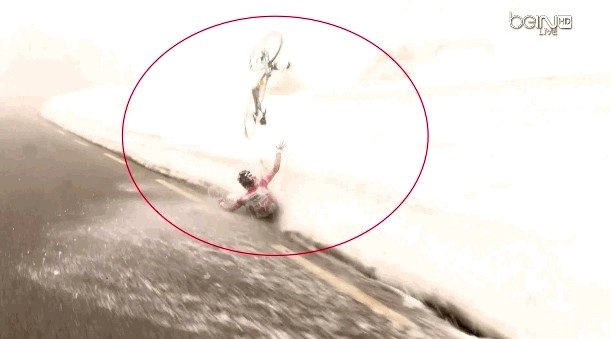 Steven Kruijswijk started his day Friday in high spirits and ended it in shambles.

The 28-year-old was leading the world’s most beautiful bicycle race, the Giro d’Italia, and that was a huge thing, because Kruijswijk has never won a major race, let alone a grand tour, one of cycling’s three-week stage races.

Back on May 3 when the race started in his native Netherlands, few picked him to win. But after nearly three weeks, he proved to be the strongest. He climbed with the best and held his own at every test. He was a revelation. All he had to do really was stay out of trouble. ANSA-PERI/DI MEO/ZENNAROKruijswijk at the start of Friday’s stage was all smiles in his pink leader’s jersey.

Then he crashed — dramatically — into a massive snow bank on a fast descent:

He hit the turn too hot, hit the snowbank, flew over the handlebars, landed hard on his back, and bounced up on his feet. He escaped serious injury.

As he had damaged his bike, it took him a while to get racing again.

Meanwhile, his rivals raced up the road, and he eventually gave chase, though he had no teammates to help him. He ended up losing his lead and finished the day in third place overall.

No one saw anything like this coming. Most assumed he’d take the big win handily.

Kruijswijk was devastated, saying postrace: “I screwed up. A stupid mistake. It hurt so much.”

The race isn’t over, and he could still win, but it’ll be difficult to do that now.

Saturday’s penultimate stage is another tough mountain day, and he’ll have to not only beat his rivals but take back lots of time on them. That’s unlikely.

If Kruijswijk can’t pull off an equally dramatic comeback, this will go down as one of the most dramatic grand-tour losses ever.

The wild thing is, Kruijswijk was on his way to making a different kind of history, for if he could keep his lead he would’ve become the first Dutch rider to win the Giro. DON’T MISS:Our favorite photos so far from the Giro d’Italia

NEXT UP:Aussie cyclist has an incredible streak going that we may never see again