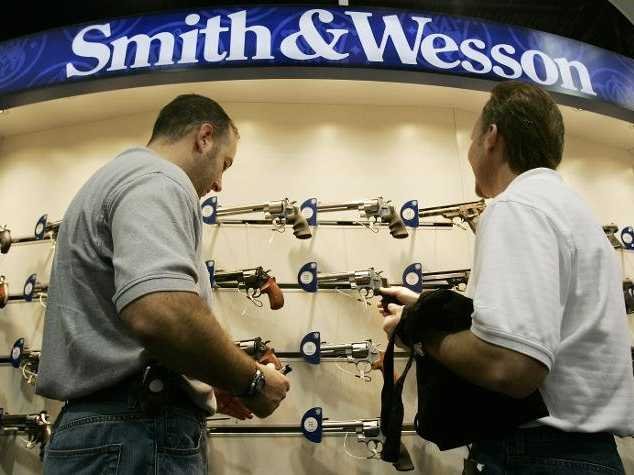 Business at the gunmaker Smith & Wesson is going gangbusters.

On Monday evening, management announced that it was raising its guidance because sales had been unexpectedly strong.

For the three months ending January 31, it estimates that it will have $175 million to $180 million in sales, up from its earlier guidance of $150 million to $155 million. This is much higher than the $155 million expected by analysts.

According to a press release, “the sell-through rate of its products at distribution has been stronger than originally anticipated, resulting in reduced distributor inventories of its firearms.”

In other words, people are buying guns faster than merchants can restock the shelves.

The stock is up over 11% since the announcement, which occurred after the US stock market closed.

“At the top of the list is an effort to expand background checks on gun sales by forcing more sellers to register as federally licensed gun dealers,” the Associated Press reported. “The changes would be aimed at some unregistered sellers who skirt the background check laws by selling at gun shows, online or informal settings. Other moves being considered include improving reporting of lost and stolen weapons and beefing up inspections of licensed dealers, according to a person familiar with the plans who would not be named discussing proposals before they are finalized.”

Shares of Smith & Wesson surged Monday, with the stock closing up 5.9% for the day. Shares of its competitor Sturm Ruger jumped 2.9%. This came on a day when stock markets sold off, with the Dow Jones Industrial Average falling 276 points or 1.6%.

It’s fair to speculate that Monday’s rally in gun stocks was related to the intensifying rhetoric out of the White House. The explanation for this phenomenon is simple. If there’s a risk that you won’t be able to buy guns in the near future, then buy your guns now. This boosts demand from gun enthusiasts in the short term. But there’s also a long history of Washington failing to push through significant legislation to materially hinder sales down the road. So in effect, talk of tighter gun control acts as free marketing for the firearms industry.

And the gun industry basically mocks the current administration about this in its regulatory filings.

“We experienced strong consumer demand for our firearm products following a new administration taking office in Washington, D.C., in 2009,” the management of Smith & Wesson said.

According to data from the FBI, 2015 was a record year for gun background checks, a proxy for demand.

That’s the irony of the gun-control debate: Sales spike when it seems tighter gun-control policy is coming. NOW WATCH: Mike Bloomberg, Spike Lee, and the NBA are teaming up to call for an end to gun violence