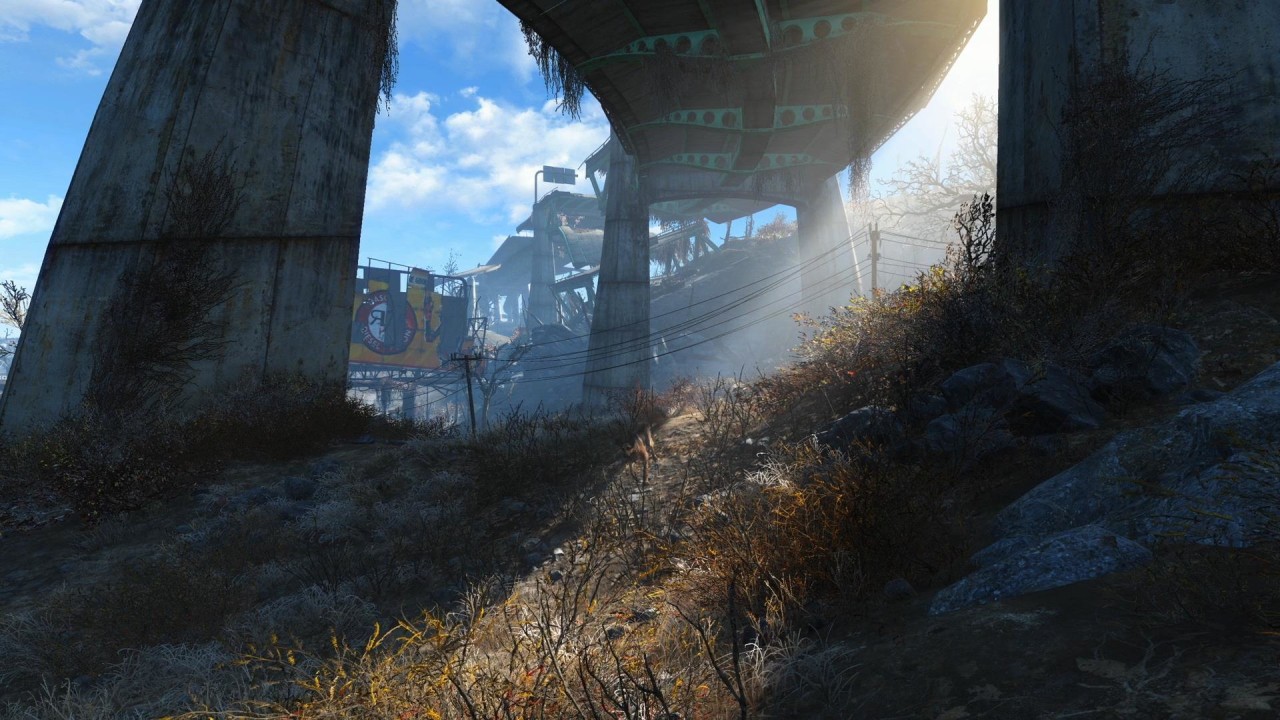 I played well over 60 hours of Fallout 4 on Xbox One. Then I picked it up on PC. According to Steam, I’ve put about 85 hours into the PC version of the game. That’s something like 140 or 150 hours with Bethesda’s huge RPG. And no, I’m not the guy suing Bethesda. I’m nowhere near done, and I plan to continue playing it for the foreseeable future.

But it’s also kind of a disappointment.

Let’s draw a clear, thick line between “disappointing” and “bad” before we go any further. Fallout 4 is not a bad game. It’s a very good game. I didn’t spend nearly a week of my life on a bad game or a game I don’t like. Fallout 4 is a disappointing game. A game that doesn’t meet certain expectations. Some of the disappointment lies with me, some with Bethesda. Let’s get into it.

We know what to expect from a Fallout game. Power Armor. The Brotherhood of Steel. Raiders. Super Mutants. Deathclaws. The Pip-Boy. When Bethesda moved the timeline of the game a full 200 years after the bomb dropped and the location 2000 miles away from its point of origin, they had a chance to make a clean break. They could pull in some of the known elements, but drop others and bring in some substantial new stuff. Instead, things stuck pretty close to what we expect. It made sense with Fallout 3. They’d just acquired the license and moving from a turn-based game to an action/shooter was already a huge change. That was enough on its own to be novel.

Now, though, that novelty has worn off. We know that Fallout can work as an action game.

The core formula these games are built on hasn’t changed much, either. The formula had grown from previous Bethesda games and matured in Oblivion and Fallout 3. Skyrim was different enough in terms of setting that I was willing to overlook the underlying sameness. Fallout 3 and Skyrim are really where the formula became set in stone. With Fallout 4, it feels like just an execution of the formula. There’s not much in the way of inspiration to be found in the Commonwealth. It feels, as I look back on the last few Bethesda games, less like a new game and more like a re-skin of the last one.

The only truly new element of Fallout 4 is crafting of items and settlements. The application of item crafting is pretty clear, and sort of expected at this point. The settlement building is fun – I’d wager I’ve spent at least a full workday just building settlements. I’m googling how to find more steel because all I want to do is make dope houses for all my sad future people to live in. But it doesn’t change the world at all. Connecting all these settlers together doesn’t turn into anything bigger like it should. It’s an extension of the house building added to Skyrim, but little more.

Beyond that, it’s the same as it ever was: digging through drawers in old buildings looking for bits and pieces, jamming stimpacks into your arm when you get overwhelmed with Super Mutants.

Then there’s the fiction of the world. It’s held together by chewing gum and old string. I’m not one to sit and nitpick generally speaking, but the little things add up as you spend tens and then hundreds of hours wandering through the game world. The base problem Bethesda’s Fallout is similar to that of Knights of the Old Republic. That game is set 4,000 years before the original trilogy because they didn’t want people to try to connect the story to the movies – they wanted freedom. Then they used that freedom to build an almost identical world. Technology didn’t change at all in four millenia? Similarly, Fallout asks us to believe that in the two hundred years since the bomb dropped, the world hasn’t started to heal. Mutated stuff? Sure, that makes sense. Plant life is all dead, and yet you can grow unlimited amounts of it with no effort.

No one’s cleaned anything up, either. There are shovels all over the place in Fallout, and instead of using them to clear piles of rubble out of living areas, we’re just breaking them all down into sticks. Similarly, half-clothed skeletons lie about in places where people supposedly live. If you were going to call a place home, wouldn’t you get rid of the bodies?

I’m used to buggy games. I have a lot of respect for developers brave enough to put together an open world. I keep rolling saves, and I’ll overlook all but the most game-breaking of glitches. I ended up beating New Vegas when I did because my followers got stuck in the middle of the Nevada desert and I didn’t want to risk anything else going wrong.

Bethesda needs more user interface designers, though. You spend as much time in menus in Fallout 4 as you do actually exploring, so those menus need to be solid. Instead, as Kotaku pointed out, you spend a huge amount of the game looking at the middle 30 percent of your screen navigating inconsistent menus trying to keep track of thousands of items, a variety of questlines made partly of automatically generated quests.

The game asks you to interact with all these systems but doesn’t give you ways to track those systems.

If I’m supposed to be managing 20-something settlements housing upwards of 20 settlers each, assigning workers to farm, scavenge, defend, and supply settlements, I need an easy way to tell at each settlement who is doing what. Settlers ostensibly assigned to work on something will be wandering around, and there’s no way to know if they’re assigned or not. There are ways around this, like equipping your settlers in job-specific outfits, but carrying around those outfits and remembering which outfit matches which task is just as time consuming. A few hours into one of the game’s main quests, you restore a settlement that gives you acess to mortar cannons that you can use while out in the field. You’re then asked to put those in at each settlement – assigning a settler to each – to cover the map. There’s no way, though, to know which settlements have mortar cannons set up, which mortar cannons are operational, and whether or not the area you’re in is covered. So you just guess.

In that way, Fallout 4 isn’t that different from its mobile counterpart, Fallout Shelter – both games ask you to manage huge piles of information and then refuse to give you good ways to organize that information.

The map, too, is miserable to deal with, but it’s not a place I spend much time in, so it’s easier to excuse. Even so, it shouldn’t be as difficult as it is to find myself, my destination, and my cursor.

In just about every respect, it feels like Bethesda, in the process of creating this massive game packed with places and stories to explore, forgot to take the time to watch how people actually play the game.

Bethesda knows how to make a game that’s so compelling that it’s borderline addictive. People lose sleep over it, skip chores, miss television shows. But while creating that, it seems like the team lost sight of some important things – how it holds up in the long term, how easy it is to use their software, and bringing in fresh, new content. I love Fallout 4, but it has been more disappointing than just about any other game this year in many respects.