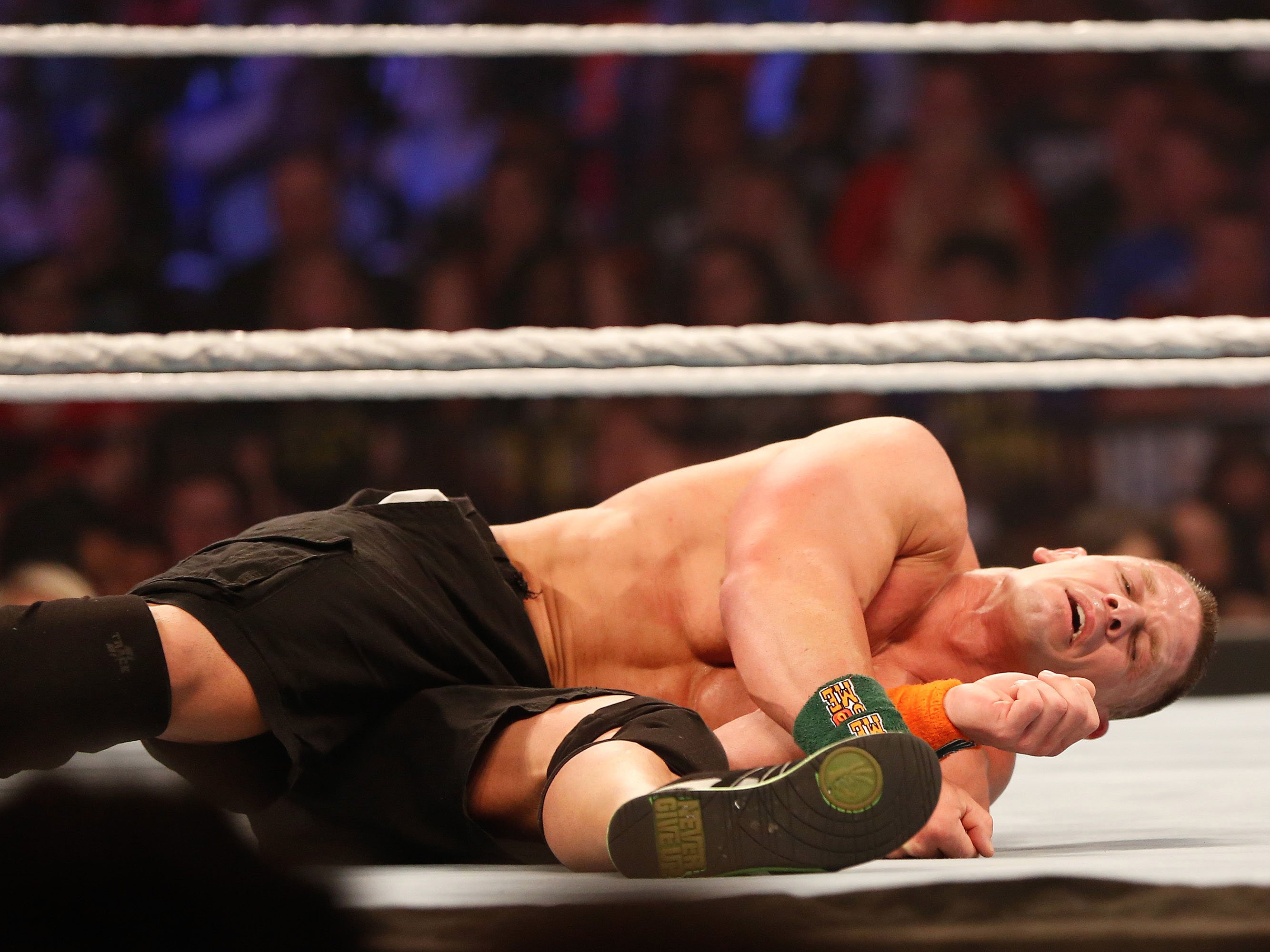 JP Yim/Getty ImagesJohn Cena recovers from a blow during his fight.

John Cena and Brock Lesnar have been fixtures of the World Wrestling Entertainment scene for years.

Drawing viewers and attention, they contributed to bringing in the record $540 million in revenue for WWE in 2014. Cena alone was estimated to be worth over $100 million for WWE in 2013.

According to one Wall Street analyst, however, that’s all topping out.

James Clement at Macquarie Capital tracks the WWE in monthly research notes on the company. As an entertainment company, the WWE is focused on using stars to draw bigger crowds and more pay-per-view subscribers to its events.

Clement wrote in a note Tuesday that Cena and Lesnar have peaked as draws.

“[Cena and Lesnar] are, in our opinion, WWE’s most popular stars but both have probably reached their popularity ceiling,” said Clement. “In other words, we don’t see either taking WWE’s popularity to the next level, particularly among some of WWE’s younger, newer fans.”

This also presents a problem as the WWE has launched its own over-the-top subscriber network and driving new customers to the year-and-a-half old network is key, even according CEO Vince McMahon. After an initial uptick, the number of subscribers stagnated in the second half of 2015. The network went from 1.156 million subscribers at the end of June to 1.173 million at the end of September according to company financial releases. Estimates had pegged the total before 3Q earnings somewhere between 1.275-1.325 million according to Clement.

Clement described this as a “pause” in new subscribers and emphasized the need to invest in new stars. JP YimDean Ambrose and Roman Reigns celebrate their victory at the WWE SummerSlam 2015 at Barclays Center of Brooklyn on August 23, 2015 in New York City.

“In [Roman] Reigns and [Dean] Ambrose, WWE can build consolidated brand value by continuing to hone their personalities both in the ring and on the microphone and create a deeper talent roster at the main event level,” wrote Clement.

Without those draws, there could be worries over continued subscriber weakness, which would be bad news for WWE’s stock.

“If WWE can’t resume building its Network subscriber base on a year-over-year basis during [WrestleMania] season, the stock will likely see some weakness.”

In order for the WWE to succeed it needs big stars, and at least according to Clement those stars may not be Cena and Lesnar.

SEE ALSO:A professor has calculated how much blowing up the Death Star in ‘Star Wars’ would set back gross galactic product

NOW WATCH: Ian Bremmer: Angela Merkel is going to have a bad 2016