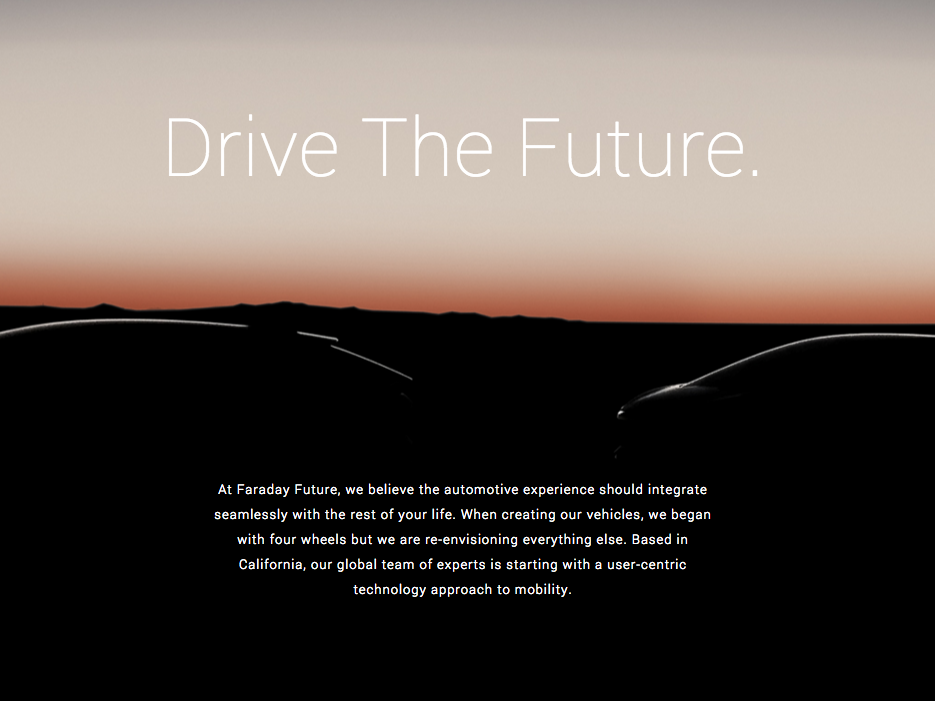 Faraday Future is a transportation startup that’s about to get real.

At the Consumer Electronics Show early next year in Las Vegas, it’s planning to pull the cover off a concept car.

The company, which is also going to build a factory in Las Vegas, has been releasing tease-y little videos that hint at what it might be up to.

And given that there are effectively no automotive startups out there right now, besides of course Tesla, FF is benefitting from a welter of Tesla comparisons.

Mind you, Tesla has been around for a decade and is building two cars that people actually pay money for and drive. Faraday is a long way from rivaling that.

So when Faraday Future first popped onto our radar a few months back, we dutifully pointed out that all the “Tesla killer” buzz around the mysterious company was misguided.

Faraday’s objectives are starting to cohere, but much of what the company is churning out pre-CES is pure hype-stoking marketing.

The latest video is aimed squarely at an enthusiast crowd that wants to believe that FF is going to showcase something fast and sexy. A previous video played up all the buzzy transportation tomorrowland notions that are exciting the Silicon Valley elite these days.

Faraday FutureIt has at least one wheel.

This is a deft strategy. Faraday Future’s actual future is completely provisional at this juncture. It can roll out an amazing concept car at CES — and then never build it (showing some kind of concept hitting the road, as FF has now done, is already deeply annoying to anyone who knows the car business, because concept cars frequently serve as design studies or dream machines and are incapable of sustained propulsion).

Or Faraday could say that it’s going to develop a transportation system that enables car-sharing on a massive scale, asking us to overlook the nagging fact that car-sharing has achieved very limited adoption and in the estimation of some industry heavyweights only works around college campuses.

Faraday could zig or zag, or zig and zag, or … neither zig nor zag. Unfortunately, this maximum flexibility playbook is going to encounter one very significant obstacle at CES. If the concept car is too conceptual, the car people who are on hand to see what’s behind the curtain are rapidly and loudly going to declare that FF stands for “Fail Fail.”

If you’re observing from the outside, you can see that what Faraday has been putting out bears some resemblance with what Apple is doing on its own car project. This leads one to conclude that there are perhaps two main ways of launching a new car company.

The first — exemplified by Tesla and Google — parallels the way the traditional auto industry works. Essentially, build a car, drive it around, and sell it. Tesla followed this playbook transparently. Google has a new wrinkle on the same thing: building a fleet of self-driving cars to test and perfect autonomous technologies related to transportation. The second is exemplified by Apple and Faraday Future and parallels the way many tech businesses are run: in secret.

In fact, the idea is to be so secretive that whatever you’re doing eventually stops making sense. For example, if Apple is building a car, it’s tackling the challenge in a way people in the auto industry find intriguing but also baffling. Apple is making odd executive hires and treating the whole process as if it’s reverse-engineering alien UFO tech in clandestine labs.

And to what end? To create a machine that will probably have four wheels and carry kids to soccer games on weekends.

Faraday Future, on balance, is being a bit more forthcoming than Apple, which has really said nothing about its car project. But Faraday is also producing mainly buzzworthy gibberish, with the bulk of the company’s gauzy pronouncements intended to convince you that you’ve been thinking about cars all wrong for your entire life.

That’s why Faraday has said that it wants it create “clean, connected, smart mobility for all,” and that it will “launch with fully-electric vehicles that will offer smart and seamless connectivity to the outside world.

“Beyond traditional electric vehicles,” Faraday Future continues on its website, “we are also developing other aspects of the automotive and technology industries, including unique ownership models, in-vehicle content and autonomous driving.”

In this respect, Faraday reminds me of an updated version of Better Place, an electric-car battery-swapping company that launched in 2007 and for a time was competing with Tesla for futuristic mindshare.

Like Tesla with Elon Musk, Better Place had a charismatic CEO, Shai Agassi, but unlike Musk, he was far more accomplished at distributing ideas than he was at executing on them. Better Place pivoted around until the whole battery-swap business model collapsed, sending the company, which had raked in hundreds of million in venture funding, into bankruptcy in 2013.

I was always pretty skeptical of Better Place, and a lot of it had to do with Agassi, who struck me as a savvy marketer, good at pulling the prevailing Davos levers, rather than doing anything as mundane as building the EV equivalent of gas stations.

He basically reconceptualized the electric car as more of a cell phone, a gadget with a battery that could be exchanged for a new one when the juice ran out. Because batteries were — and still are — the major expense associated with EVs, Better Place took that cost off the table and treated electrons like gasoline: When you run out, you simply pull into a swapping station to “fill up” with a new battery.

But it was obviously too think-y for prime time. And it reminds me of Faraday Future’s approach thus far: all the thrilling possibilities are front and center.

The rubber eventually hits the road

I think it’s safe to assume that a car of some sort is in Faraday’s plans. But this isn’t impressive in any way. Cars have been built for over 100 years. It isn’t that hard, once you assemble the manufacturing expertise and equipment, to slap one together. If you’re handy, you could even do it in your garage. All the EV startups that were around ten years ago when Tesla got serious were aware of this. Their objective was to join Tesla is hastening the development of modern electric cars as an alternative to the gas-powered engine. More or less all of them failed, leaving Tesla as the only survivor.

My sense is that Faraday has learned a lesson from this, which is that it’s pointless to be just another electric car company.

The vast majority of people have no interest in an electric car. Tesla has thrived because it’s captured the most affluent segment of the currently small group of people who do want an EV. But the electric-car efforts of major automakers have met with severely limited success.

And so we’re getting all the “It could be this, it could be that” stuff out of Faraday. It makes the company seem fresh, a new chapter in mobility rather than a latent reset of mid-2000s electric-car optimism.

We’ll see if FF’s concept-car reveal manages to firm matters up a bit and silence the naysayers. The bottom line is that Faraday Future has plenty of people in the auto and tech industries talking. And while they were talking about how little they knew about what Faraday was up to, in a matter of weeks it could be about how the company’s future is bigger than they could have imagined.

But in order to make that happen, Faraday needs to do something stunning at CES.

SEE ALSO:Faraday Future has 4 hurdles to overcome before it challenges Tesla

NOW WATCH: SpaceX just released epic footage of its SuperDraco engines that can take a rocket from 0 to 100 mph in 1.2 seconds