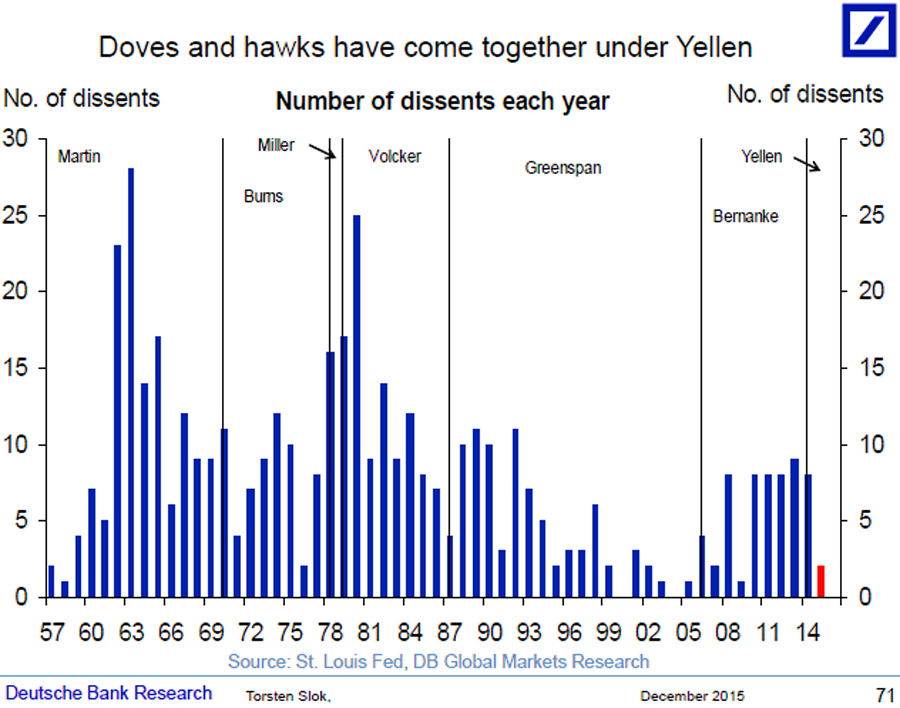 There’s been an awful lot of talk about monetary policy in 2015. An awful lot.

Week after week and month after month, there has been continuous and rigorous debate over whether the Federal Reserve should or shouldn’t begin tightening monetary policy with interest rate hikes.

One day, one regional Fed president would say one thing, and on another day a Fed governor would say another.

Despite everything, the Fed eventually settled on December to begin hiking rates.

What was particularly remarkable about 2015 was that during this year’s 8 Federal Open Market Committee (FOMC) meetings with 10 members voting at each meeting, there were only twodissenting votes (both from Richmond Fed President Jeffrey Lacker).

“With such divergent views about monetary policy in the market it is interesting how united the FOMC has been in their views about policy during the year of liftoff,” Deutsche Bank’s Torsten Slok said in an email on Wednesday. “As the Fed raises rates at a turtle speed in 2016 I believe we will see a decline in the standard deviation of the views in the market,” he said. “In other words, instead of focusing intensely on minor tail risks more investors will come around to the view that the economy is moving closer and closer to full capacity and that is why the Fed needs to push rates higher.”

Whatever happens, we can at least say that Yellen has done a remarkable job of convincing the voting members of the Fed that monetary policy is on the right track.

For some historical reference, here’s a tally of dissents under Yellen’s predecessors at the Fed (via the St. Louis Fed): And if you still haven’t gotten enough, enjoy this infographic from the St. Louis Fed: SEE ALSO:Here are the best charts about the markets and economy we saw in 2015

NOW WATCH: Ian Bremmer: Angela Merkel is going to have a bad 2016