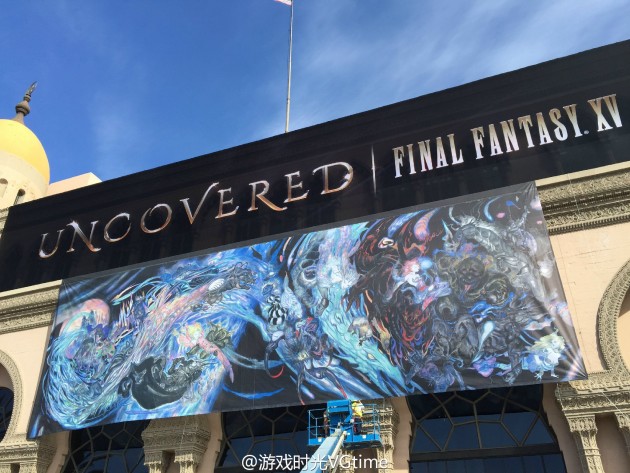 We’re nearing the big Final Fantasy XV announcement with each passing day, and with two days before the highly anticipated “Uncovered: Final Fantasy XV” broadcast, Square Enix has begun decorations. And what screams “Final Fantasy!” louder than anything else but Yoshitaka Amano art?

Famed as the visual force behind almost every game since the very beginning, Final Fantasy XV flaunts Amano’s style proudly with this huge banner dangling in front of the Shrine Auditorium in Los Angeles. I’m not entirely sure what I’m looking at, where Noctis or his sweet ride are, or what bro-tastic scene Amano was trying to convey here…

…but I like it a lot. Sadly, Amano has been less influential over the years as Square Enix turns to a more anime-influenced art style that the Akihabara crowd is into, but when his art does show up in the promotions, it’s a solid reminder that plenty of the genius that pushed the series to the forefront is still there, bubbling underneath Lightning’s silly cosplay adventures.

Final FantasyXV is going to be something special, and we don’t have to wait much longer to get more information on it.“Uncovered: Final Fantasy XV” airs on Wednesday, March 30 at 7:00PM PT.

Final Fantasy XV launches for the PlayStation 4 and Xbox One in 2016.