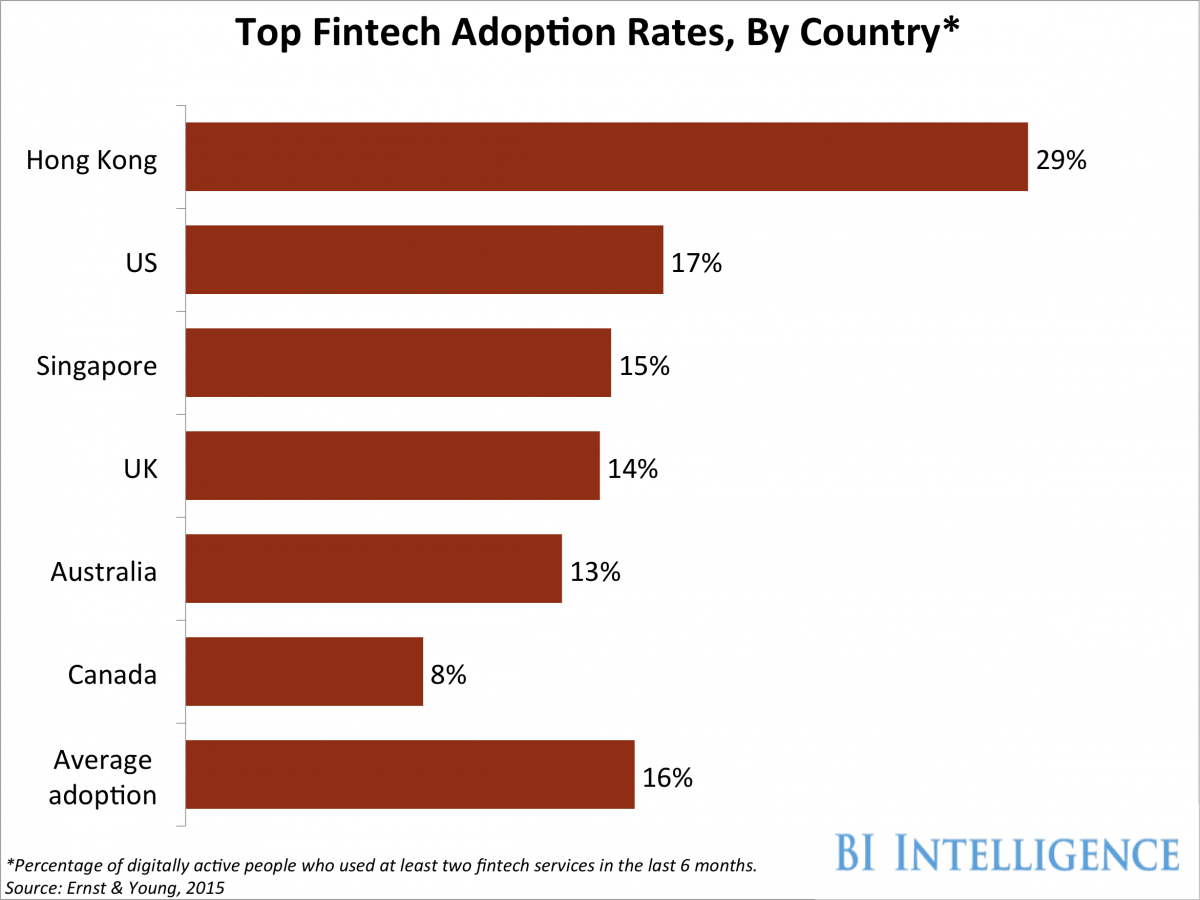 Welcome to Fintech Briefing, a morning email providing the latest news, data, and insight into disruptive fintech in the UK and Ireland, the Continent, and beyond, produced by BI Intelligence.

Want to receive Fintech Briefing to your inbox? Enter your email in the box below.

UK TREASURY CAUTIONS EUROPEAN COMMISSION ON FINTECH REGULATION: In September 2015 the European Commission put out a call for comment on whether the EU’s financial services legislation contains regulation that could potentially stymie economic growth. The consultation is part of a larger review of post-crisis financial regulation. In a response to this call for comment, the UK Treasury recently provided five suggestions aiming to encourage fintech growth.

The UK’s support for fintech is no surprise considering that financial services or related professional services accounts for 7% of its workforce and 12% of the UK’s £2 trillion GDP. Fintech generates £20 billion in GDP, according to a fintech manifesto produced by Innovate Finance. INDUSTRY GROUP FORMED TO EXPLORE BLOCKCHAIN’S IMPACT: Financial services industry association ISITC Europe released a report on the first meeting of the Blockchain Working Group in London. The Blockchain Working Group specifically focuses on how blockchain technology will impact technology and operations of capital markets with the goal of setting standards and influencing regulation. The report argues that payments and currency are blockchain’s first major applications, with smart contracts and market facilitation currently in development stage.

ISITC believes that blockchain’s key innovation is “simply being able to transmit value at a distance without an intermediary.” The technology, which relies on a digital ledger to track transactions, could enable transactions to pass between two parties instantly and without the need for centralised authorities like clearing houses. This type of technology could streamline a variety of processes and increase transaction security. It could also lower infrastructure costs in the financial industry by up to $20 billion annually by 2022.

Financial institutions are in the process of researching how blockchain could apply to their businesses. ISITC noted that current experimentation is teaching financial institutions about the technology itself as well as its security, governance and legal ramifications, interoperability and scalability of a blockchain system, and standards and data use. Currently, several startups, including R3 CEV and Chain, are working with a variety of global banks and financial institutions to test use cases for blockchain in areas like inter-bank transfer and cross-border payments.

Financial institutions willingness to experiment should not be taken as willingness to adopt. There are still significant risks that go along with adopting blockchain technology. MasterCard told Business Insider that it’s interested in blockchain innovation, but wants to avoid being “blindsided” if security or other issues arise with the technology, for example.

THE ROLE OF FINTECH IN EUROPE IS BECOMING CLEAR: Finovate Europe, an industry event which was held last week in London, showed that major players in the finance and payments industries are shifting away from seeing fintech firms as disruptors and towards viewing them as potential collaborators, according to Finance Magnates.

Initially, traditional financial institutions were threatened by fintech firms. That’s because fintech firms are often able to provide a better user experience with lower friction and cost of services. Because fintech services are offered digitally, that can also lower the cost of customer acquisition. That helps expand the market to customers that banks and other traditional institutions can’t profitably take on.

But now, legacy institutions and fintechs are moving towards co-opertition. Rather than challenging the legacy players, fintechs are increasingly focusing on building robust SaaS platforms and white label products that larger players can buy or license. And this lucrative opportunity to sell into larger firms is driving fintech investment. In the UK, fintech investment increased by 215% year-over-year (YoY), and many major banks are among the investors contributing to the surge.

BI Intelligence predicted more partnerships between traditional financial institutions and fintech firms as banks try to cater to a younger, increasingly digital-savvy clientele. In the US, a similar market, 91% of millennials have a smartphone, and 65% use it for banking activities. By licensing or buying platforms from fintech firms, banks could remain competitive without having to invest in building their own platforms.