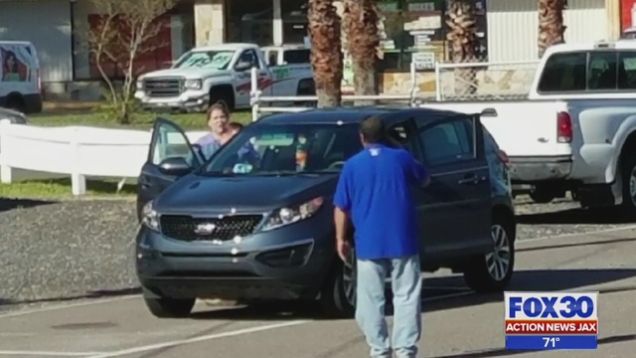 Sometimes, when babies want to come into this world they don’t wait until you get to the hospital. In a perfect example of that, a Florida couple ended up delivering their newborn in the lot of a used truck dealership in Jacksonville.

ActionNewsJax.comspoke with dealership office manager Melissa Bomar, and she described the whole ordeal:

“I was in my office. One of the guys ran in and said we need to call 911,” Bomar said. “There’s a baby being born in the parking lot.”

She said her ‘mommy instinct’ kicked in as her coworkers called 911.

Within seconds, a baby boy was in Bomar’s hands.

Paramedics arrived shortly after the delivery and took the baby and his parents to the hospital.

Bomar said she wanted to be a nurse when she was a kid, but couldn’t stand the sight of blood. That didn’t stop her from stepping in and preventing an emergency. From ActionNewsJax.com:

“I know that sounds bizarre,” she said. “I guess everybody says that you get put in a position sometimes and you don’t know how you will react until you’re in that position.”

The little boy ended up being just fine; he weighed almost 8 pounds and was 20 inches long. The parents named him Alix Xavier and they plan on bringing him back to the dealership for a visit.

I’m disappointed in you, Florida parents. You couldn’t have picked a name that is more appropriate for the place your child’s birth like Duramax, Tundra, or Axle, that’s like Alix but with more truck!

On second thought, maybe Alix was a good call.