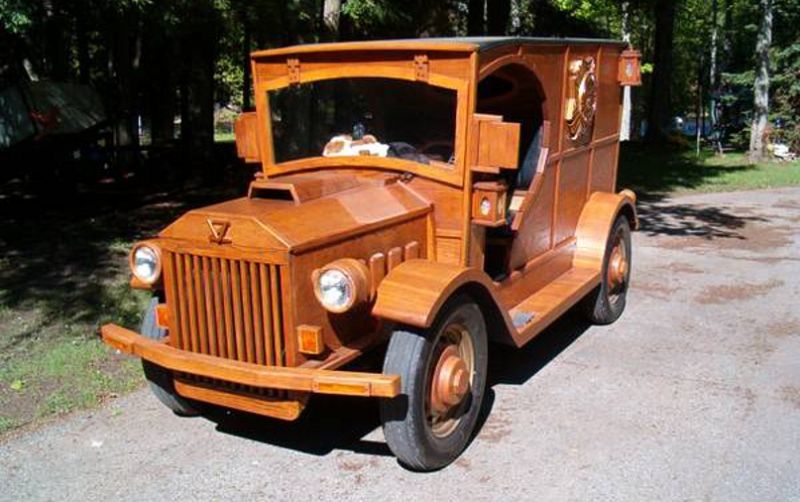 Built by a disabled veteran as therapy, and fashioned after a Keystone Cops paddy wagon, today’s Nice Price or Crack Pipe custom Ford is a woody in every sense of the word. It also comes with its own trailer, but will its price have you saying knot on your life?

There was no uncertainty in the decision to go with last Friday’s flawed 1998 Mercedes C43AMG, at least not to the 56% of you sketchy risk takers who voted its bargain basement, open box, back alley, no warranty price to be nice.

That hot Benz may have seemed a diamond that was rough, but then there’s nothing that money can’t solve, right?

Well, if you’ve been injured—either in battle or otherwise—or have in some other way been impacted by war, there’s often no amount of money that can make things right. Oftentimes healing takes an unexpected avenue, as in the case of the case of the disabled vet who built today’s custom woody (all woody) wagon apparently as therapy following an injury.

Now, you’ve probably all heard the joke about the kid who is ostracized at school because he has a wood eye, and who builds up the courage to ask the one girl who’s ever been nice to him—the hunchback girl— if she would like to go to the prom with him.

For some reason this custom car makes me think of that old knee slapper. I’m guessing that it perhaps has something to do with the car being made entirely of wood.

Now the 1936 Ford upon which this is based didn’t have as much wood in it as did its predecessor, the Model T. The earlier cars were a haven for termites as their bodies were built on a wooden frame, but by the time of the V8s almost all the wood was replaced with steel structure.

Not on this one however. The ad says that the builder was a veteran and leader of the local Veterans of Foreign Wars. In fact that’s the VFW logo carved in wood on the side of this paddy wagon. Everything else you would expect to be of metal on the car is in fact wood. The build was done in the ‘90s and the builder has since passed away so we sadly can’t let him know how impressed we are with his work.

Underneath all the oak is a 1936 Ford V8 chassis and running gear. That should mean an 85-horse 21-stud 221 V8 and a top-loader three-speed. That flathead has nicely been updated with an alternator. It still has mechanical brakes which you might expect would make stopping a chore, although the ad says the car “stops well.”

Wood doesn’t generally like being outdoors all the time and so this custom woody comes with—as the ad says—its own garage. That’s a 2006 26-foot tandem-axle trailer with drive-on ramp back door.

It’s unlikely that the woody would ever be able to tow that trailer so you can forget Inception-style antics where you tow the trailer and then get into the trailer but then can’t tow it. Better if you have some sort of other truck with a hitch.

Why would anyone want a custom all-wood truck? Well, the ad makes a good case for its use in parades, at events, etc. The VFW connection would also make it a hit at any and all Veteran’s gatherings. And in the end, it’s just plain fun.

How much does that fun cost? The asking for the car and the trailer is $24,000 and if you think that you could replicate it for that kind of cash, well, you’re a better woodworker than I am. What do you think, is this custom and its house worth that sort of cash? Or, does that price make you want to measure twice and cut out?

Grand Rapids Craigslist, or go here if the ad disappears.

H/T to CarsThatDriveByMyHouse for the hookup!