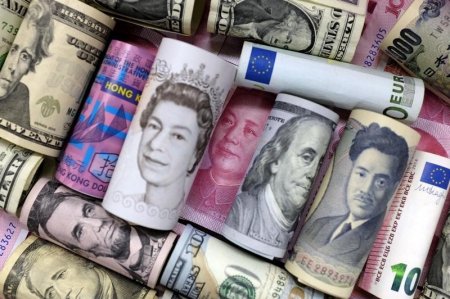 LONDON (Reuters) – The combination of a slow-growth world of shrinking policy options and the splintered political voting patterns it’s fostered is stifling the global economy at a critical juncture.

Preying on the minds of financial markets for the past year has been a fear that there’s no big economic policy bazooka to fire at another cyclical downturn or recession.

With major central banks maxed out at near zero interest rates and inflation rates still below target, spikes in investor alarm like the one seen in January are becoming more frequent as evidence of a China-led world slowdown mounts and oil-led deflationary pressures persist.

Relentless pressure on global banking share prices – still half of what they were before the credit crisis – illustrates both the downsizing of that sector and persistent doubts about its future business model almost a decade after the sub-prime bust.

Implicitly accepting their central banks had little live ammunition left to cope with another recession, G20 finance chiefs last month tried to tilt toward fiscal spending and taxation as a preferred tool policy – at least for countries who could afford it.

But even if government intervention could be funded or economists convinced that ‘fiscal multipliers’ to spur the real economy were worth it, confidence in a political consensus to execute it is low given increasingly fragmented parliaments with rising numbers of parties and polarized views.

Describing a world economy with a ‘slow puncture’, HSBC’s economic adviser Stephen King this week painted a bleak picture of the coming years trapped in a ‘Japan-style deflation’ with monetary or fiscal demand stimuli increasingly ineffective.

“Pumping up a deflated world economy … will require both patience and a large dose of good luck,” he wrote, highlighting a need for underlying reforms of corporate and trade structures that, even if successful, may take years to bear fruit.

But the problem with fiscal stimuli or long-term structural reforms is they require a high degree of political buy-in across the spectrum – something ‘technocratic’ institutions such as the central banks rarely had to consider even as they adopted some of the more extraordinary policies of recent years.

And voters aren’t playing ball. Disaffected by years of joblessness or sub-par wages, public service cuts or rising inequality, electorates have sought a variety of scapegoats from bankers to immigrants to globalization and multi-lateral institutions and the political establishment in general.

Whether in German local elections this week, the wider euro zone in recent years, this year’s U.S. Presidential race or British referenda on Scotland’s secession and UK membership of the European Union, political fractionalization is rife.

And historians would say we should have seen this coming.

A study released late last year looked at elections and financial crises in 20 advanced countries going back to 1870. It showed support for far right parties rises most after these sorts of banking shocks – on average by about a third within five years – and this is as true of the post-World War Two period as the more infamous example of the 1930s.

The other finding of the study – by German economists Manuel Funke, Moritz Schularick and Christoph Trebesch – was that governing becomes more difficult after financial and banking crises in particular as ruling parties cede votes to oppositions and the number of parties within parliaments rises.

This second effect has become stronger over time, it said. And both outcomes are more marked than after regular recessions or other macroeconomic shocks that don’t involve banking crises.

“These developments likely hinder crisis resolution and contribute to political gridlock,” the authors wrote. “The resulting policy uncertainty may contribute to the much-debated slow economic recoveries from financial crises.”

The reasons for such an outsize political reaction to banking shocks are less measurable.

The writers say it could be because voters see financial crunches as ‘inexcusable’ problems resulting from domestic policy failures, moral hazard and cronyism whereas typical recessions are often seen as cyclical or due to international factors beyond the control of local politicians.

But a key reason for the backlash is that, unlike most other industries, banks are typically bailed out by government due to fears of a wider systemic failure and this leads to considerable popular resentment – particularly when the sheer cost of a bailout forces government cutbacks elsewhere.

The study showed the strongest electoral reaction to these crises was within the first five years and politics tended to return to more normal settings thereafter.

And so it speaks to the scale of 2007/2008 global banking collapse that political reverberations are still being felt, and in some cases intensifying, almost 10 years on.

While markets tend not to react violently to incremental political developments, there is a worry among many big investors that political surprises will sow ever more volatility as long as the world economy struggles to grow and that economic funk will in itself make those surprises more likely.

“We should expect the improbable to increase,” Mohamed El-Erian, chief economic adviser at Allianz, said on a trip to London this week. “The rise of anti-establishment parties is a product of low growth, rising inequality, a political system that’s failed to deliver and an over-reliance on central banks.”

But, he added: “Markets don’t price in extreme political outcomes until they’re faced with it.”