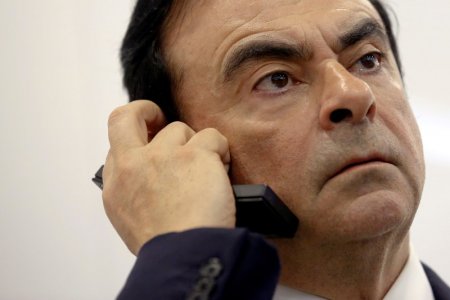 Thomson ReutersCarlos Ghosn, Chairman and CEO of the Renault-Nissan Alliance, attends a round table discussion during Auto China 2016 auto show in Beijing

In comments to lawmakers, Macron railed against what he called Renault’s “dysfunctional governance”, after shareholders rejected Ghosn’s pay package on Friday — only to be immediately overruled by the carmaker’s board.

After the consultative vote at Renault, in which the state wielded more than 18 percent of voting rights as the carmaker’s biggest shareholder, the board voted again to maintain last year’s CEO payout, while pledging to review its pay structure for 2016 and beyond.

“What we are very clearly demanding is that Mr Ghosn live up to his responsibilities with regard to his compensation for 2016,” he said.

The government will seek a further Renault board meeting to “draw the necessary conclusions”, Macron said. “Failing which we would be compelled to legislate.”

Renault had no comment on Macron’s comments when contacted by Reuters.

Ghosn’s total 2015 payout included 1.23 million euros in fixed salary, 1.78 million in variable pay and a further 4.18 million in deferred bonuses and stock That was in addition to his second salary as CEO of 43.4 percent-owned affiliate Nissan , which last year amounted to 8 million euros.

Across the Channel in Britain, shareholders have staged a series of protest votes over what they regard as excessive pay for executives.