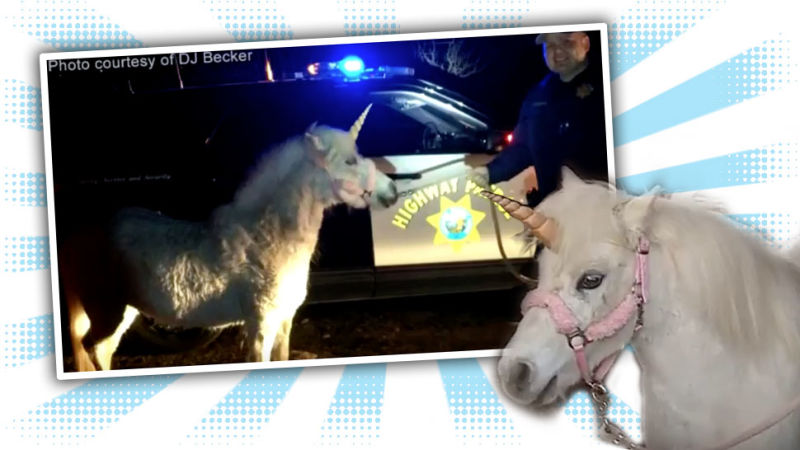 The collection of muffler shops and strip clubs collectively known as “Fresno” is known for many things, but a healthy and active unicorn population is not one of them. That’s why it was so surprising that CHP officers spent three hours chasing a rogue unicorn in the area.

The unicorn, who goes by the name ‘Juliette,’ was working a children’s photo shoot in the Madera Ranchos area, a common side job for local unicorns who have managed to avoid the seedy, sparkly world of underground unicorn prostitution.

Juliette, however, possibly displeased at the clichéd quality of the fairy-tale themed photo shoot, made a break for it, and bolted out into the streets of the Fresno-adjacent town.

The California Highway Patrol’s crack mythical-beast containment team was called, ready to take the unicorn down by any means necessary. Some have accused the CHP of only wanting to get the unicorn so they could feast on the beast’s silvery blood, granting themselves eternal beauty and youth, but a CHP spokesperson, Fraudula Falsepersona, denied this:

The California Highway Patrol is not at all interested in capturing a unicorn to drink heartily from a spurting artery, the hot, silver blood cascading down [the agency’s] throat, intoxicating us with youth and beauty forever. No matter how much the CHP desires to commit such an act, we will comply by California law that prevents us from draining a unicorn of its blood.

CHP unicorn-hunters went so far as to use a helicopter and a thermal-imaging system to locate the mythical brute. It is not known if the CHP deployed paranormal magic-dust detectors in the area.

Eventually, the unicorn was found hiding in an orchard, and was lured into custody by using a horse known to the unicorn as bait. The unicorn, possibly seeking to eat or mate with the horse (or both; unicorns are quite unpredictable) approached the horse and was captured, likely by trained unicorn-wranglers using nets made of fairy-silk and griffinskin.

Upon examination after the fact, it was discovered that Juliet was, in fact, a pony in a cunning unicorn disguise. This sort of deception is a sad reminder that unicorn impersonation remains one of Central California’s horse communities greatest sources of illegal income, second only to the heroin trade, which has even been nicknamed “horse” after the drug’s most prolific dealers.