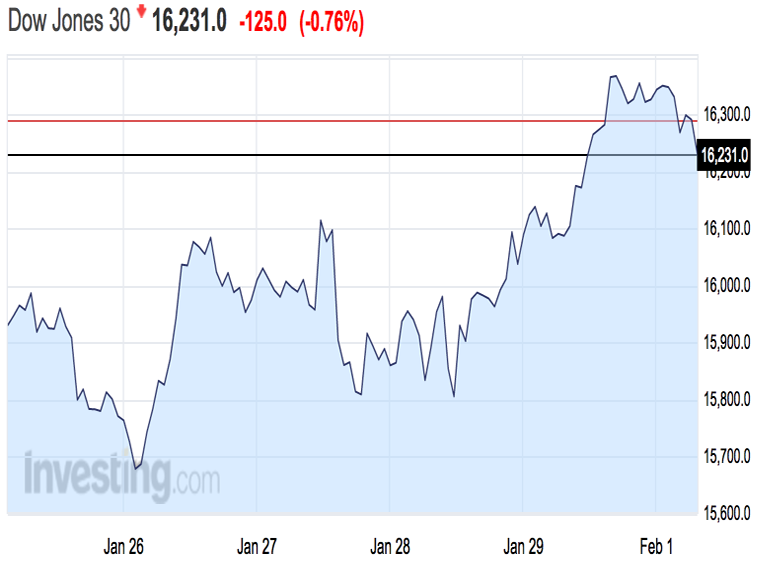 After a solid two-day rally late last week, futures are retreating ahead of the start of trading on Monday morning.

The Dow closed up nearly 400 points on Friday, but the rally was not enough to avoid the worst January for the index and the benchmark S&P 500 since 2009.

In the news, the official index that gauges Chinese manufacturing (the PMI) fell to 49.4 in January from 49.7 in the prior month, missing forecasts and extending declines for a sixth straight month. It reflected the biggest drop in manufacturing activity in the country since August 2012.

We’ll get two readings of US manufacturing later this morning, from Markit Economics and the ISM, which are expected to show that the sector made little to no progress last month.

The data calendar is packed this week, with the January jobs report capping things off on Friday. Be sure to see our preview of all the big market-moving economic events of the week here.

Crude oil was lower; West Texas Intermediate crude futures fell by about 3.5% to as low as $32.41 per barrel early on Monday. There were reports and a denial of possible talks between OPEC and non-OPEC countries about production cuts, but many of the analysts we’ve read say that an agreement is unlikely.

The impact of low oil prices continued to unravel over the weekend, as the FT reported that Nigeria, Africa’s largest economy and an OPEC member, requested a $3.5 billion loan from the World Bank and African Development Bank.

SEE ALSO:THE WAIT IS OVER: Everything you need to know ahead of a huge week for the US economy

NOW WATCH: Research reveals why men cheat — and it’s not what you think