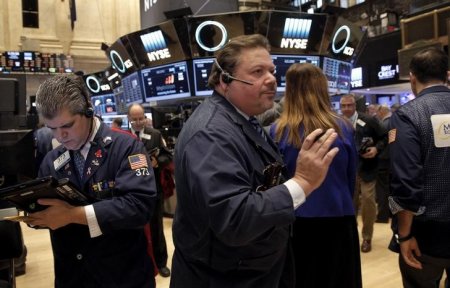 Thomson ReutersTraders work on the floor of the NYSE

* U.S. crude oil prices were down more than 3 percent, also pressured by data showing an increase in stockpiles. [O/R]

* Stocks have closely tracked oil prices this year as investors fret about the health of the global economy.

* The S&P 500 is down 6 percent for the year, while the Nasdaq composite has shed more than 10 percent.

* The S&P financial sector is the worst performer among the 10 major S&P sectors, down 12.5 percent in the last two months, as banks brace for defaults from beleaguered oil and gas companies and face the brunt of volatile financial markets.

* Economic data due on Wednesday includes a report on new home sales, which are expected to have fallen 4.4 percent in January. The data is due at 10 a.m. ET (1500 GMT).

* Investors will also analyze comments from U.S. Federal Reserve policymakers for clues on the central bank’s view on the state of the economy ahead of its meeting next month.

* While Fed Chair Janet Yellen has hinted that the central bank is likely to stick to its plan to raise rates gradually this year, other policymakers have expressed caution about pressing ahead amid the turbulence in global markets.

* Shares of Lowe’s were down 2.1 percent at $66.50 premarket after the home improvement chain reported results.

* JP Morgan was down 1.1 percent at $55.50 after it said it would set aside another $500 million in provisions for expected losses on energy loans and that its investment banking revenue was falling. At least three brokerages cut their price targets on the stock.

(Reporting by Abhiram Nandakumar in Bengaluru; Editing by Anil D’Silva)