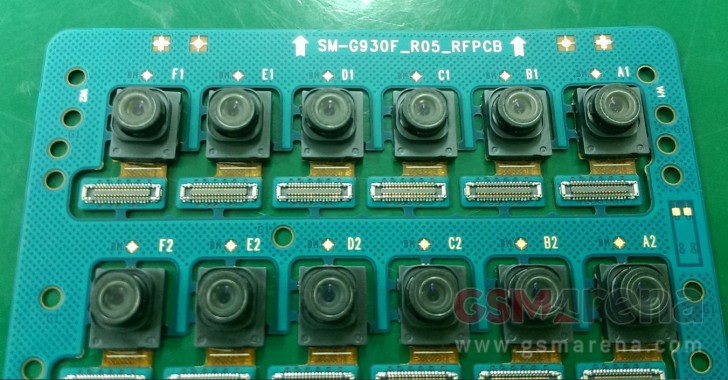 The Galaxy S7’s front-facing camera and display have been pictured for the first time ahead of the handset’s official debut. The components are thought to be from a prototype device, so we’ll have to wait a little longer to find out what the new handset will look like.

The photos above were obtained by GSMArena, which claims they came “straight from [Samsung’s] production line.” The model number printed on top of the board holding the camera modules (SM-G930F) confirms these are Galaxy S7 components.

The other image revealing the Galaxy S7’s display is thought to be a prototype device, so don’t expect the Galaxy S7 to actually look like this. We’re fairly certain its bezels won’t be anywhere near that big; recent reports have claimed it will look very similar to last year’s Galaxy S6.

These photos don’t reveal much about the Galaxy S7, but they do confirm it’s now in production. The handset is expected to get its official unveiling at Mobile World Congress next month, before going on sale in the U.S. — and probably many other markets — on March 11.

The Galaxy S7 series is expected to offer Qualcomm’s latest Snapdragon 820 processor, 4GB of RAM, a new 12-megapixel rear-facing camera with larger sensor, and a microSD card slot. It is also expected to have a pressure-sensitive display like iPhone 6s.