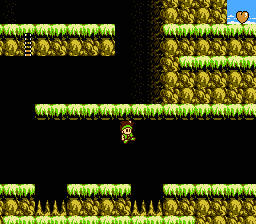 My turn for a Guess the Game segment, and I’m not going to go easy on you for my freshman outing. This NES mini-masterpiece is a game that very few people played when it was first released. A limited, rental-only run exclusively through Blockbuster Video in 1992, a full year after the Super Nintendo hit the market, made quite sure of that.

The limited quantities also make it either impossible or appallingly expensive to find on secondhand markets, and since nobody remembers this excellent little game from Taito, the demand for it to pop up on Virtual Console just isn’t there to justify it.

In other words, unless you emulate, you’ll be missing out on one of the NES’ most entertaining, boundary pushing titles. This game has a reputation of being more of a technical wonder than a fun game, and I’ll back up half of that argument. Developer Takeru, who I can’t find anything else about, obviously used every last little bit of memory and space in an NES cart to deliver this game, and it shows in its brilliant sprite animation, flawless parallax scrolling, and unrivaled soundtrack.

They must have been wizards, because I can’t imagine how they pulled off half of these graphics.

However, I don’t buy into the idea that this isn’t a fun game. Not one bit!

As I said, this game is basically Mega Man with a hero who can latch onto walls and ceilings. This is only one a quarter of the game, though. In between the music and superb graphics, Takeru also crammed in the mechanics for four individual characters onto this NES cart. Accompanying our hero (his name is the title of the game) are his friends: Kikira, a flying, fire-breathing dragon, Gamm, a golem with a rocket punch, and K.O., a little mouse who can squeeze into smaller cracks.

Together they must save a kidnapped king and traverse levels designed to take advantage of their unique abilities.

What’s also wonderful about this game is how deep its lore is for something that is not a licensed product. This game comes complete with a beautiful fantasy world, four main characters who overflow with personality, and supporting characters who cheer them on from the sidelines, too. There is enough imagination here to lead me to believe Taito planned for this to bud into a multimedia franchise with an anime or a manga, but because it sold poorly, such ambitions never panned out.

If you can guess the title and have heard of a manga or anything to go along with it, be sure to let me know.