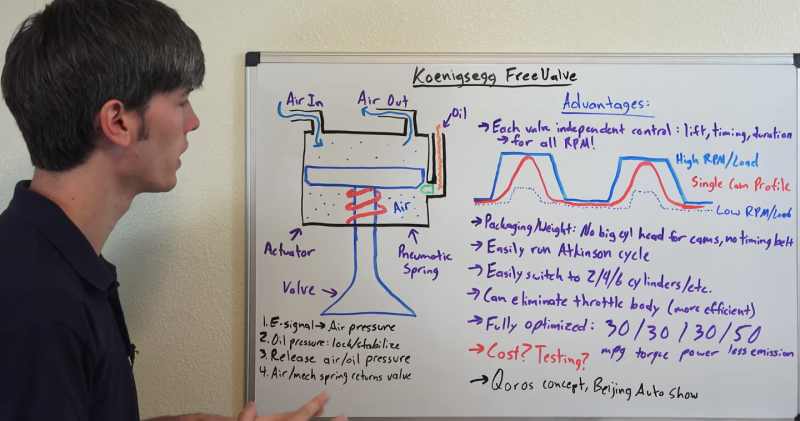 This is how a camless engine works, something we’ve seen over the past four years from Swedish supercar builders Koenigsegg and the imaginatively-named FreeValve.

Put simply, instead of a metal camshaft physically pressing a valve down and open, an actuator forces the valve open with air pressure. Check out Engineering Explained’s simplified diagram to get a sense of what that looks like:

We explained a lot of this ourselves when we visited Koenigsegg back in 2014, and saw how much more efficient an engine can be operating on a much more digital/binary scale than a physical one. A valve in an engine using a camshaft gradually opens and then gradually closes, thanks to the physical design of a camshaft. A valve in a camless engine can open just about all the way instantly, and close just a well. You can change how this all looks at any RPM, you can easily cut off any cylinders individually, and you get a lot more freedom to run an engine how it would like to be run.

At the moment the system is very new, and likely quite expensive, but hopefully its cost and complexity will go down as the tech matures.

OK But When Are We Getting The Anti-Gravity Stuff, Koenigsegg?