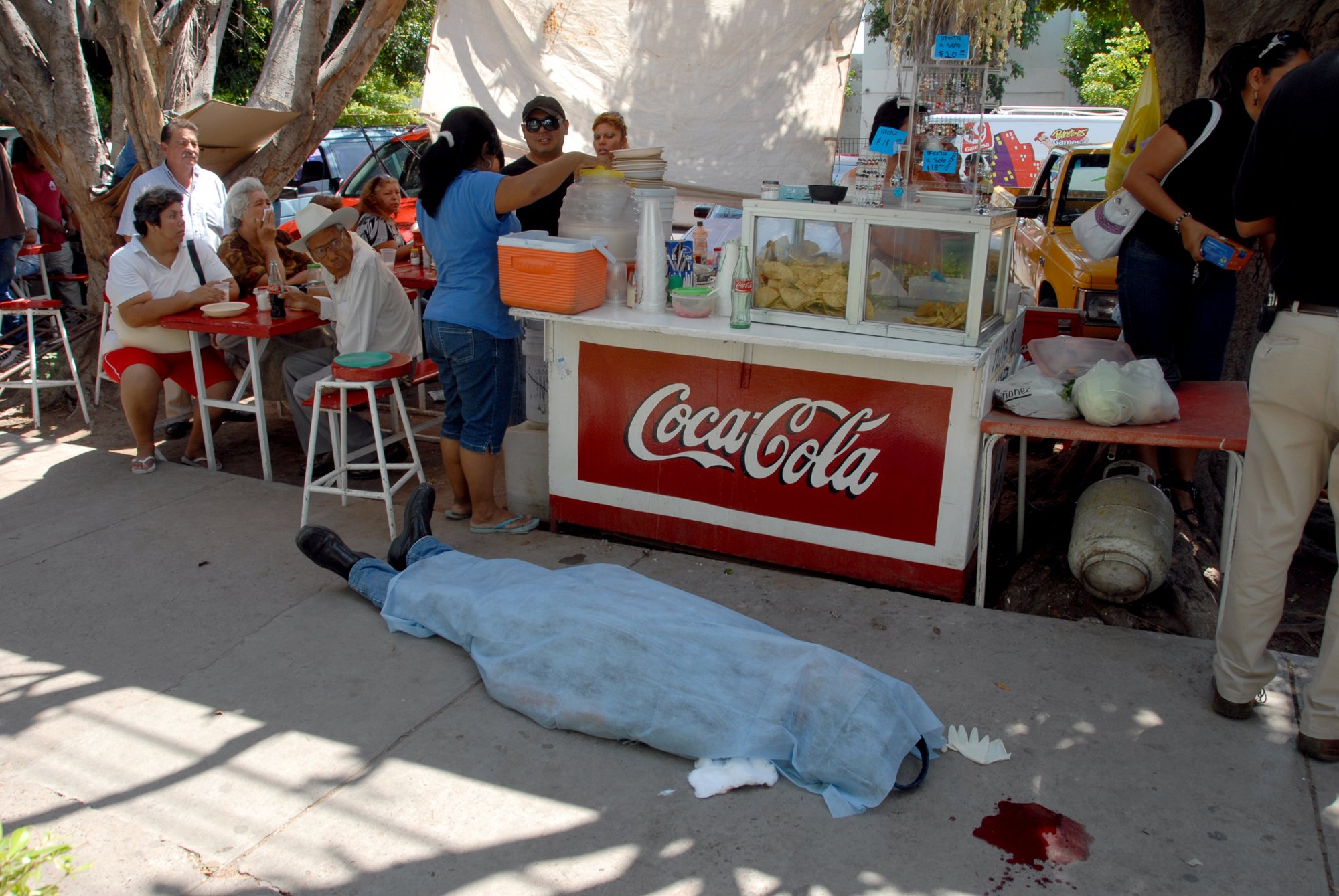 ReutersPatrons seen at a taco stand as the body of a man lay on the pavement, in Ciudad Obregon, Mexico, in 2010. According to local media, the man died after suffering a fatal heart attack.

The war on drugs that has raged across Mexico over the past decade has led to the deaths and disappearances of hundreds of thousands of people.

The human costs of the drug war and related violence are well known, but the chilling effect on Mexico’s economic vitality has been harder to measure.

Recent research has shown that high levels of violence in Mexico — like the 7.6% increase in homicide rate the country experienced in 2015 — not only have a negative impact on workers, but also prevent complex economic activities from starting and growing.

“Increasingly economists are arguing that what really matters is not how much [people] participate in the market, but the particular sectors and industries in which these persons are participating,” said Viridiana Rios, a scholar at Harvard and fellow at the Wilson Center in Washington, D.C.

“What violence is causing … is killing the industries that are complex. In those regions that are very violent, complexity cannot flourish,” Rios said during a presentation at the Wilson Center in January.

“Those sectors that are complex require a lot of skills, like technology, like professionals, like … software development, the aerospacial industry, the automobile industry, that require way more abilities,” Rios added. Viridiana RiosChanges in monthly homicide rates in Mexico over the past three years. The country began seeing an increase in homicides in early 2015 that continued through the end of the year.

Mexicans are also leaving the country for higher education, in part because of violence, a trend that is depriving the country of workers with the requisite skills for advanced industries to grow.

Violence has a measurable effect on economic opportunity and growth in Mexico.

“An increase of 9.8% in the number of criminal organizations is enough to eliminate one economic sector,” Rios wrote in a paper published in December. “Similar effects can be felt … if gang-related violence increases by 5.4%,” she said.

For every increase of 10 percentage points in homicide rates in Mexico, “you see an increase in unemployment in that region of half a point,” Rios said at the Wilson Center. “Unemployment currently in Mexico is 5%, so for each 10 points of increase in the homicides rates, you see half a point extra on unemployment. That’s pretty significant.”

‘An extra cost of business’ Viridiana RiosA measure of resiliency for economic sectors in Mexico. The higher the score, the less that sector is affected by violence.

“A violent Mexico is going to grow in industries that are naturally resilient to violence,” Rios said, citing the capital-intensive electrical industry and mining, which has thrived in conflict-prone regions in the past, as sectors that can endure in the face of growing violence in Mexico.

Corporations could also adapt to high levels of violence, Rios said, as they have shown that they “can internalize the cost of violence, just like one more thing in their production function.” REUTERS/Alejandro AcostaPolice officers near the covered body of a person who died after a bus was set on fire in Guadalajara in 2012. Gunmen torched vehicles and blockaded roads in metropolitan Guadalajara during a military operation to arrest two leaders of the Jalisco New Generation cartel, local media reported, saying two people had died.

“Big companies operating in Mexico [aren’t] affected that much by organized crime,” Tom Wainwright, the former Mexico City reporter for The Economist and author of “Narconomics,” told Business Insider.

An exception may be the oil industry, which loses billions of dollars a year to oil theft.

And if multinationals can operate in the face of organized violence, that doesn’t mean they are immune to crime: Cartels have ransacked PepsiCo-owned trucks and extorted mining conglomerates operating in Mexico, as journalist Ioan Grillo has documented. ReutersSoldiers at a gas facility of Pemex in Reynosa in 2012.

The retail industry and some service industries, however, could have more trouble functioning in violent environments.

Businesses in the tourism industry, for example, could struggle to attract customers, and businesses catering to local consumers may find it hard to escape the influence of criminal elements.

“The people that really hurt from the cartels are the small businesses. You go to a little shop in a place like Juarez, and extortion there is rife. Every business in a city like that is paying a weekly payment to the cartels,” Wainwright told Business Insider.

“I spoke to a barman there, he said he just looked at it as if he had an extra employee — the cartel,” Wainwright said.

“It was about the same as employing an extra person. It’s just an extra cost of business that they have to learn to deal with, and if they don’t deal with it, then they pay the consequences.” Viridiana RiosThis map, based on homicide rates in 2015, shows in green where economic complexity could grow and in red where complex economic sectors could struggle. Areas in white didn’t have enough information to measure.

Divergent trends in growth related to the viability of different industries have already started to emerge in Mexico.

States that are home to advanced industries like automotive and aerospace manufacturing, and border regions that benefit from trade with the US, had growth rates well above the national average in 2014.

But other regions in Mexico — heavily populated, underdeveloped, and poorly governed — have struggled to grow in recent years. (A problem exacerbated by ongoing turmoil in the oil industry.) REUTERS/Edgard GarridoA doctor walking past graffiti on a wall along a street in Mexico City in 2013.

Persistent and intense violence could solidify these trends, preventing economic development in some areas of Mexico, and if this kind of violence seeps into areas not previously affected by it, then it could have a negative effect on development there as well.

As Rios’ research shows, prevalent violence won’t necessarily prevent some industries from operating, but it may undermine the ability of Mexicans to foster and grow complex economic activities.

“Mexico could keep growing — it’s just that it is not going to grow where we want it,” Rios said.

SEE ALSO:Here are the powerful Mexican drug cartels that operate in the US