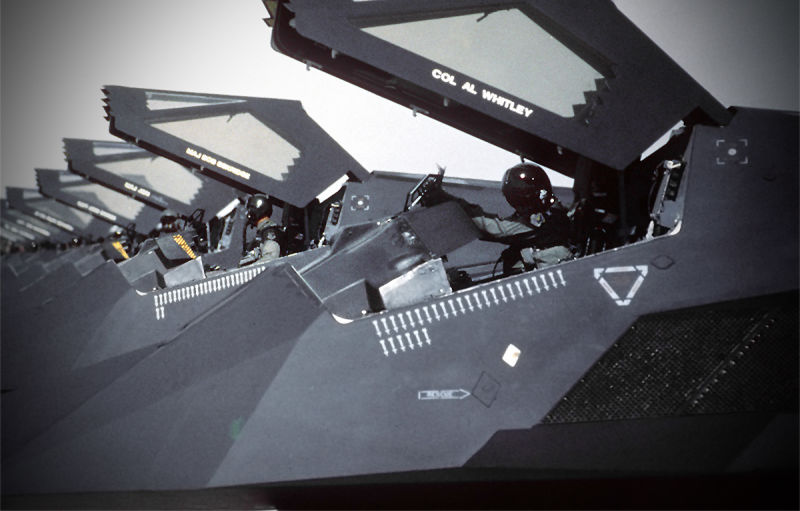 One of the most spellbinding military capabilities used 25 years ago during the Operation Desert Storm was stealth technology. Despite many billions of dollars invested, until that point it had never been proven in actual combat on a large scale. This would change in the opening moments of the conflict as F-117s raided Baghdad with dramatic results.

By January of 1991, the F-117 had come out of total secrecy, but it still was a shadowy weapon system. It had been operating under a veil of the top-secret classification out of Tonopah Test Range Airport through the 1980s, buts its actual effectiveness was still up for debate. The jet’s mission over Panama was less than successful, but that was nothing compared to going after strategic targets deep inside a super-missile engagement zone and anti-aircraft artillery trap over a huge metropolitan city that was literally waiting to be attacked.

The F-117, America’s first operational “stealth” aircraft, remains one of the most charismatic yet… Read more Read more

On the first night of Desert Storm, the small force of “Black Jets” were given the job of sneaking through Iraq’s border radar defenses, and were to be over Baghdad right as the air war kicked off at 3 a.m. They would use their hardened 2,000lb GBU-27 laser guided bombs to hit telecommunications, power and command and control centers, along with other strategic targets.

Although pilots and crews trained for this exact type of mission, there were no guarantees that stealth would work under real combat conditions. And while the press may have put forward the image that the F-117 was an “invisible” jet, the fact is that no plane is fully invisible to radar or infrared sensors—let alone the human eyeball. Going into downtown Baghdad would be far from easy.

Planning was key, factoring in all known air defense installations and the F-117’s most stealthy aspects in relation to them would give pilots the best chances of survival. This information—garnered from months of the Air Force’s aircraft surveying Iraq’s electronic order of battle and from more clandestine sources—was all fed into the F-117’s automated mission planning computer system. Some have said this system was just as intrinsic to the aircraft’s success as its unique airframe and radar absorbent coatings.

In August 1990, 18 F-117s supported by a small armada of aerial tankers would travel from the western United States to King Khalid Air Base in the southwest corner Saudi Arabia as part of the buildup to Desert Storm known as Desert Shield. The base, located outside the city of Khamis Mushait, was chosen for its high-end facilities and its position outside the range of Saddam Hussein’s SCUD ballistic missiles.

Then in December 1990, a second installment of 18 Nighthawks would descend into Saudi Arabia in preparation for a all-out assault on Iraq’s war-fighting capabilities.

Brad Smith, a communications and avionics specialist on the F-117, told Foxtrot Alpha in an email what it was like to send the Nighthawk into battle for the first time:

I deployed to Khamis Mushait in early December of 1990 with a few hundred of my 4450th Tactical Group brothers and sisters. We worked 6 days a week, 12 hour shifts, as I recall, from 1000 to 2200 hours. We settled into a daily routine of launching and recovering familiarization flights and flights near the southern border of Iraq to test whether or not the F-117 would cause Iraqi radars to light up. In hindsight, I think those tests went well.

On normal days, an avionics troop would be dropped off at each aircraft about 2 hours prior to take off. We would start the INS spin up and perform avionics preflight checks. We’d check the radios, Infrared system, and navigational systems. Launch time was usually critical due to tanker rendezvous and time on target (ToT) requirements and there wasn’t much time for the crew to have maintenance issues.

On the 16th of January, 1991, started as a normal shift. We were making preparations for the evenings sorties when things started feeling different, the kind of different you can feel inside, you knew something was going to happen that night. It felt electric.

Once official word came down in the early evening that “tonight was the night,” night shift was the normal flying shift and always had enough people to get the planes off the ground, but, day shift was not going to be relieved. This is was what we trained for and we wanted to put that training to use. Dayshift stayed to backfill where needed.

Each aircraft launching that night had a full maintenance crew while the pilot went through their checks. The F-117 had three ground communications cord connectors and we were all plugged into the intercom. As the pilot prepared to taxi and requested we disconnect, each of us gave our well wishes and I distinctly recall saying “Godspeed sir.”

Each of us had such a unique feeling of pride, responsibility and accomplishment as those planes took off and headed north. I’ve always said that most maintainers are frustrated pilots, life got us in the cockpit, but not to fly. I know many of us were with those pilots as they headed into combat, willing the systems to work flawlessly, allowing those pilots to come home.

At 2:51 a.m. on the morning of January 17, 1991, Major Greg Feest dropped the first bomb of Operation Desert Storm as part of the first ten aircraft to raid key strategic sites around Baghdad. Two more waves of F-117s would follow on the 17th.

Even though estimates for combat losses were as high as five percent, all the jets returned after their sorties that first night. Stealth had passed with flying colors.

Here are some of the pilots’ personal accounts of those first missions:

The F-117 was one of only three weapons that were cleared to strike targets in downtown Baghdad, the other two being a limited number of classified AGM-86C cruise missiles launched from B-52s under operation Secret Squirrel, and throngs of BGM-109 Tomahawk cruise missiles launched from Navy ships. For just representing two and a half percent of the fixed wing combat force, the F-117s attacked 31 percent of the targets on the opening night of Desert Storm.

This is from the then-Secretary of the Air Force in Lockheed Skunk Works boss Ben Rich’s memoir Skunk Works:

“With exception of the F-117, which had been sent ahead and were already past the border on their way to Baghdad, the rest of the armada was purposefully being held-back out of the range of a string of Iraqi early warning radars near the Saudi Border. We sent Apache helicopters to take them out and that attack was launched at 21 minutes to 3:00AM… At one minute past three, one of the CNN reporters said “whoops the phone in our room just went dead.” A minute later, at two minutes after three, the lights in their room went out. That told us that the real attack had actually begun. We had pre-planned that, at two minutes after three, the first F-117s would take out the telephone center and central power station in downtown Baghdad. And that’s how we learned back in Washington that the leading elements of the F-117 attack force had dropped their precision bombs exactly on time.”

EF-111 Raven jamming aircraft that were able to charge at low-level through a hole in Iraq’s air defense opened up by Task Force Normandy would provide standoff jamming for the the initial F-117 strikes as an insurance policy against the yet to be proven stealth technology.

You have to kick down an enemy’s front door somehow, and in the case of Operation Desert Storm, a… Read more Read more

This electronic warfare support for F-117 strikes would continue often throughout the air campaign, although not for every F-117 sortie. Nighthawk crews would not cancel their missions if EF-111 support became unavailable. When the EF-111s were supporting F-117 strikes, radar operators would likely increase gain on their systems, which would make any tiny reflection that the F-117 gave off at certain aspects, or if access panels or weapons bay doors would not close, disappear with the maelstrom of electronic clutter.

The EF-111 Raven, a highly effective electronic warfare variant of the F-111 Aardvark that assisted in keeping F-117s safe over Baghdad during Desert Storm:

In fact, as time went on, it was clear that when the EF-111s were cluttering Iraqi radar scopes, anti-aircraft guns would light up over Baghdad. As such, the EF-111s would eventually commence jamming operationsbeforethe F-117s made their attack runs, timing it so many of the Iraqi anti-aircraft gun crews would be reloading or changing their molten barrels as the F-117s streaked to their targets over the city.

Beyond supporting the F-117s, the EF-111 were one of the most highly tasked platforms of the entire war and their crews’ contribution deserves far more recognition than they receive.

In all, F-117 crews would wrack up 1,280 combat sorties totaling more than 6,900 hours of flying during Desert Storm, and even though they flew directly through some of the most well defended air space on the planet, not one was shot down. Even when faced with a near visual encounter with an Iraqi Mirage F-1, the insidious Nighthawk was able to slink away unscathed.

“If you’re just above a cloud deck, with the moon reflecting off it, you can really stick out,” At one point, an F-117A was shadowed by what appeared to be an Iraqi Dassault Mirage F1 fighter, shining a landing light or spotlight in order to visually acquire the stealth jet. A gentle turn, however, broke whatever lock the Iraqi had; that was the closest any Nighthawk came to a dogfight over Iraq.

Although the F-117 force was retired from front-line service in 2008, the legacy of their performance in Desert Storm served to largely validate stealth technology. Eventually it would migrate from a niche capability to a holistic procurement strategy for U.S. and allied air arms around the globe.