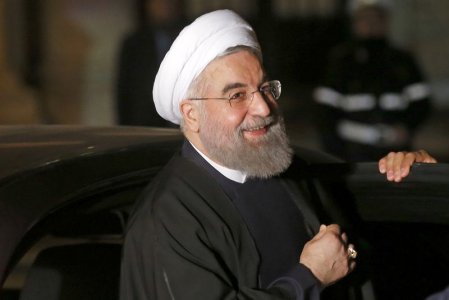 TEHRAN (Reuters) – Iran courted Western aviation firms this week with a blueprint of regulatory reforms aimed at setting aside 40 years of sanctions and rebuilding its airways with new jets.

But despite talk of a major plane order from Airbus , a raft of legal, financial and regulatory hurdles remain as Iran seeks foreign investor backing for plans to overhaul its dilapidated aviation sector.

“We are seeing massive opportunities in Iran,” said Peter Harbison, chairman of the Centre for Aviation (CAPA), an Australian consultancy, adding that Tehran needed funding, organization and manpower to do everything its airlines intend.

“Without each of those ingredients, the growth is going to be much less than optimal,” he said after chairing a major Tehran aviation conference.

A shopping list for over $20 billion of Airbus jets carried to Europe by Iranian President Hassan Rouhani this week is seen as a test case for post-sanctions trade because of the sums involved and state-of-the-art financing used in the jet market.

Although Boeing jets are not involved, completing the Airbus deal depends on the approval of the U.S. Treasury, which must approve sales to Iran of jets with over 10 percent U.S. parts.

Even then, Iran must work out how to pay for the jets, delegates at the Iran Aviation Summit organized by CAPA said.

Iran on Monday urged Washington to remove any lingering obstacles to implementation of the accord under which sanctions were lifted in return for curbs on its nuclear activities.

“I expect a very short process. Actually we expect them to expedite all these efforts to .. open the way for legal business cooperation between Iranian and foreign entities,” deputy foreign minister Abbas Araqchi told reporters at the CAPA event.

Washington has said Iran may still not use its financial system, raising potential difficulties for jet deals denominated in dollars. If Iran pays for its planes in euros, any money subsequently converted into dollars may create problems.

A senior Iranian official said Tehran was in touch with the U.S. Treasury to clarify the status of such transactions. U.S. officials could not immediately be reached for comment.

Iran meanwhile faces warnings that Western banks may hold off from backing aircraft and other deals until rules are clear.

“I think we need much more clarity on what (the U.S. Treasury) is going to authorize or not,” said Bertrand Grabowski, a managing director at Germany’s DVB Bank.

In a further twist, Iranair remains locked out of a dedicated global financial system for air tickets because it is based on laws of Canada, which has not lifted sanctions on Iran.

“To have Western banks effectively financing directly aircraft to Iranian airlines is going to be a tough call. This isn’t going to happen in the next 18 months,” Grabowski said.

However, he said some banks may be more willing to support the activities of leasing companies working in Iran.

Aircraft leasing companies, who control about 40 percent of the world’s fleet, eagerly touted for business at the Tehran event, joined by suppliers from 35 nations offering Iran badly needed wares from avionics to airports.

“We are behind, we admit that,” Deputy Transport Minister Asghar Fakhrieh Kashan said.

“Therefore we have decided to … look for the solutions and try to find proper responses to any questions” on funding.

Kashan said Iran was looking at joining the 2006 Cape Town Convention, a treaty of more than 60 nations designed to boost trade by protecting aircraft owners in return for cheaper financing.

“That is a very positive signal for me,” said Dick Forsberg, head of strategy at Dublin-based leasing company Avolon, while warning investors Iran would not be a “gold rush”.

President Rouhani, a pragmatist, has been trying to attract technology and investment to bolster Iran’s shattered economy. But some analysts say political in-fighting, and the possibility of fresh sanctions if Iran violates the deal, worry investors.

Allies of Supreme Leader Ayatollah Ali Khamenei, who has the last say on state matters, have already begun to criticize new oil contracts that are also designed to attract investors.

While Iranian officials gave assurances that they would respect foreign investors’ ownership rights, some delegates at the aviation conference saw potential sticking points over Iran’s attitude to collateral on some transactions.

Britain’s export credit agency said last week it was open to doing business in Iran, boosting the prospect of aircraft sales. But such agencies typically demand security on the jet even if the buyer is government controlled and can put up a state guarantee to pay money owed.

That may be a problem for Iran, which regards its sovereign-backed guarantees as word enough and is reluctant to offer collateral on the asset as well, delegates said.

Grabowski said Iran had reassured investors but “they need to deliver, and this is where it is going to be difficult”.