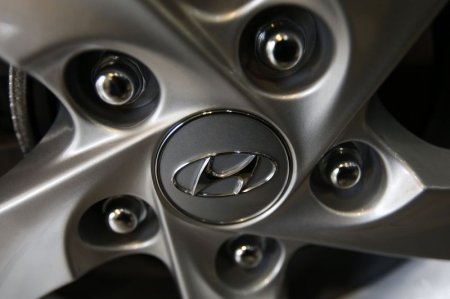 Thomson ReutersThe logo of Hyundai Motor Co. is seen on a wheel of a car at a Hyundai dealership in Seoul

“Oil prices could reduce hybrid car sales. But this is the way we have to go,” Lee told reporters.

Hyundai said the compact car, named the IONIQ, achieved fuel economy of 22.4 kms per liter, or 52.7 miles per gallon, in Korea. It would be rolled out in mid-January in its home market at a starting price of about 22.9 million won ($19,145).

The latest Prius has not been launched in Korea, but Lee said the IONIQ would beat it for fuel economy in the United States and South Korea.

Hyundai has so far launched hybrid variants of their existing models like the Sonata and the Azera, but the 1.6-litre IONIQ is the first hybrid-exclusive car it has made from scratch.

It is also the first car to offer three electrified versions, including plug-in hybrid and full-electric. Hyundai plans to introduce a plug-in hybrid version late this year after rolling out a pure electric version.