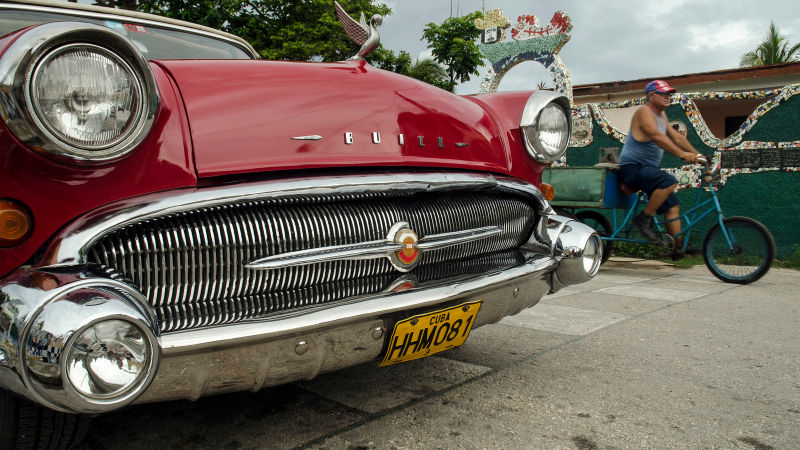 Cuba is about more than just old cars, but the island nation’s adversarial history makes car ownership unique from almost any other place in the world. If you have a car in Cuba, you probably have an old car.

This post originally ran in 2012 and is being republished.

One humid night in Havana, I met the second owner of a 1937 Pontiac with a three-speed manual, who boasted of its stock condition. His father was the first owner. There were some niggles with the car — he had to use a screwdriver to open the trunk lid and a wire to wiggle the glove box lock.

Other than the addition of turn signals cleverly mounted on the rear parcel shelf and an electrical upgrade from a 6 volts to 12 (because 12-volt alternators are all you can get now), the car was fundamentally as it was in 1937. No custom paint or big wheels.

He loves the car and will probably hand it down to someone else when he no longer has a use for it. And that’s the feeling shared by a lot of Cubans. A car isn’t a disposable good like it is to most Americans – it’s essential to your life and you make it work as long as possible.

I spent a month in Havana earlier this year for a photography course through Northeastern University, as part of the university’s Dialogues of Civilizations program. Twenty-three of us, along with two awesome TAs and two also awesome professors, studied Cuban culture and learned about a place few Americans get to travel. Some people took a lot of pictures of fruit. I honed my very basic photo skills by taking pictures of cars – a lot of pictures of cars. These are my observations about the cars in Cuba and Cubans with their cars.

The trade restrictions imposed for the last five decades by the US have pretty much left Cuba stuck in 1959 as far as cars are concerned. But there are a lot of cars from the Soviet era, aging Russian things that got distributed decades ago. But as exporting to Cuba has been increasing slowly, the last 10 years or so have brought waves of 1980s and 1990s European cars and some brand new Chinese and Korean ones. Any of those are highly prized possessions among Cubans.

On my first cab ride in the city, the driver’s day job was as a doctor. But because he makes so little practicing medicine, he moonlights driving a taxi (and ripping off Americans) to support his family. His Lada, complete with pine tree air freshener hanging from the rearview mirror, is crucial to his livelihood.

That’s the reason cars – ones that would have been crushed in the States years ago – are mended over and over again in Cuba. Watching a taxi driver under the front of his Lada while his passengers stand on the side of the road in their bathing suits. New parts from the few companies with any presence here – Fiat, Peugeot-Citroen, Mercedes-Benz, for example – are expensive and likely only for the newest models.

While Havana is swarming with as many cars as large flying insects, four-wheeled transport is still out of reach for working families making about $20 a month – if they’re lucky. Gas costs around $4 a gallon, and that’s for 83 octane. Availability of a car in Cuba is tricky. Even though there’s a Citroen showroom and a Fiat parts department, few can afford to splurge on a shiny new C4.

Guillermo Ramirez Malberti is an artist with a fascination for Cuba’s car culture. He paints them, creates art from old radiators and Peugeot chassis and organizes old American ones in the shape of the country. It’s estimated there are more than 50,000 pre-1960 American cars, most still gleaming with chrome, roaming the country. And it’s those that capture the most attention.

“Up until 2002, it was only American and Soviet cars,” Malberti said in English that was better than my Spanish. “There is a strong sense of symbolism with the American cars.”

But while it may look like a ‘56 Oldsmobile, things are probably not what they seem underneath. Gas hungry V8s have long been ditched for Fiat four-cylinders. Some are even using differentials and greasy bits from old Land Rovers. And others are running on propane gas tanks in the trunk, because that’s cheaper than gasoline.

“Cubans get very creative with ways to fix their cars themselves,” Malberti said as he showed me how people squeeze guava and banana pieces to stop up a leaky radiator.

Malberti said there are no new parts for the old cars, which is why seats sometimes come from Volvos and halogen lights are swapped for makeshift ones with fluorescent bulbs.

Now Cubans are doing everything they can to keep post-1960 cars on the road. The amount of European cars from the ‘80s and ‘90s still chugging along is pretty surprising. 205s are everywhere, as are 405s that would be considered an oddity in the US, even most of Europe. Cuba must be where all of the remaining Fiat Tempras in the world live. Squeezing as many people into a Fiat Cinquecento as possible looks like a national sport rivaled only by baseball. I even spotted two Saab 96s running quieter than some of the Renaults used as taxis.

Korean cars are in abundance, too. Accent taxis and Rio and Sonata rentals are hugely popular. But Ladas rein supreme. Anything with the mechanical simplicity of a mango and the toughness of a coconut is bound to do well in a city where potholes connected by smoother strips of pavement are called roads (in the country, it’s cobblestones connecting those potholes).

When I saw a Mark 2 Volkswagen Golf sputtering and smoking along the Malecòn, the first thought wasn’t that this country has some really sketchy cars. I thought of how long ago that car would have been turned into a screen door after being crushed in an American scrapyard. The fact Cubans think of so many different ways to keep these old things running proves they love their cars more than most people.

All images credit Zac Estrada. Check out more of his photos of Cuban cars on his Flickr.