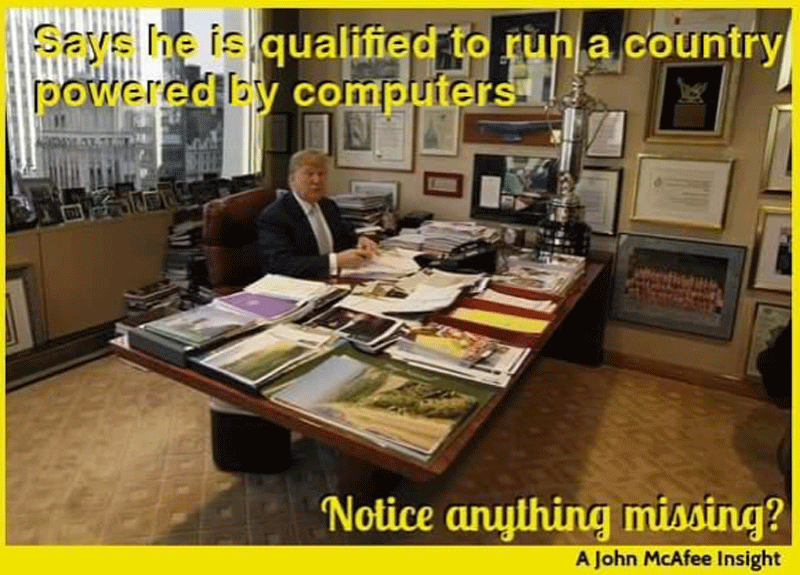 John McAfee is running for president as a member of the Libertarian Party. This is an op-ed he wrote and gave us permission to run.

I watched Donald Trump speak at Liberty University last Monday. It was inspiring, especially the part where he touted his “Great Wall” between the US and Mexico. He said that if the Chinese could do it, then so could we.

I ignored that fact the it took the Chinese over 200 years to build their wall because, as Trump rightly pointed out, the Chinese did not have bulldozers. However, I noted with great interest that Trump apparently was not informed that Mexico is, hands down, the world’s vanguard in illegal underground tunnel construction. El Chapo’s dramatic escape from Mexico’s maximum security prison through a mile-long tunnel last year is one of dozens of amazing examples that was apparently missed by Trump and his advisors.

But walls and tunnels are simple things that, hopefully, the electorate will eventually grasp without coaching.

Of far greater concern to me is Trump’s grasp of technology. The first photo that I saw of Donald Trump at work alerted me to a potential issue. There was not a single laptop, pad or other smart device anywhere on his desk. Given the fact that my own office, and the offices of everyone that I know are virtually littered with active screens, I found this to be odd in the extreme.

While pondering this, I remembered that Trump, in 2013, almost proudly stated that he rarely writes emails.

My initial impression on hearing this proclamation was that Trump was in the vanguard of those “super technologists” who are slowly abandoning emails as too slow and cumbersome and whose text messages and tweets are masterful creations of compacted characters.

But I fear I was wrong.

Our military, industrial, social and cultural worlds would not exist today were it not for the billions of computing devices that monitor and control everything from food production and distribution to our buying of socks, shoes and televisions. The electricity that powers our homes is produced and distributed entirely under automated control. Our emergency services could not function without these computing devices, neither our police forces or even our automobiles. We are fully submersed in the digital age.

In addition, most cyber security experts agree that there is an imminent cyber war on the horizon.

Given this reality, technological illiteracy should be viewed in the same light as an inability to read and write in the world of 50 years ago.

I am running for the Libertarian Party’s nomination for president in 2016. If I were to tell you that I could neither read nor write, but that I would hire advisors who would explain words to me, would you vote for me?

How then can we rationally consider electing someone who is not fully conversant in the technology that holds our world together?