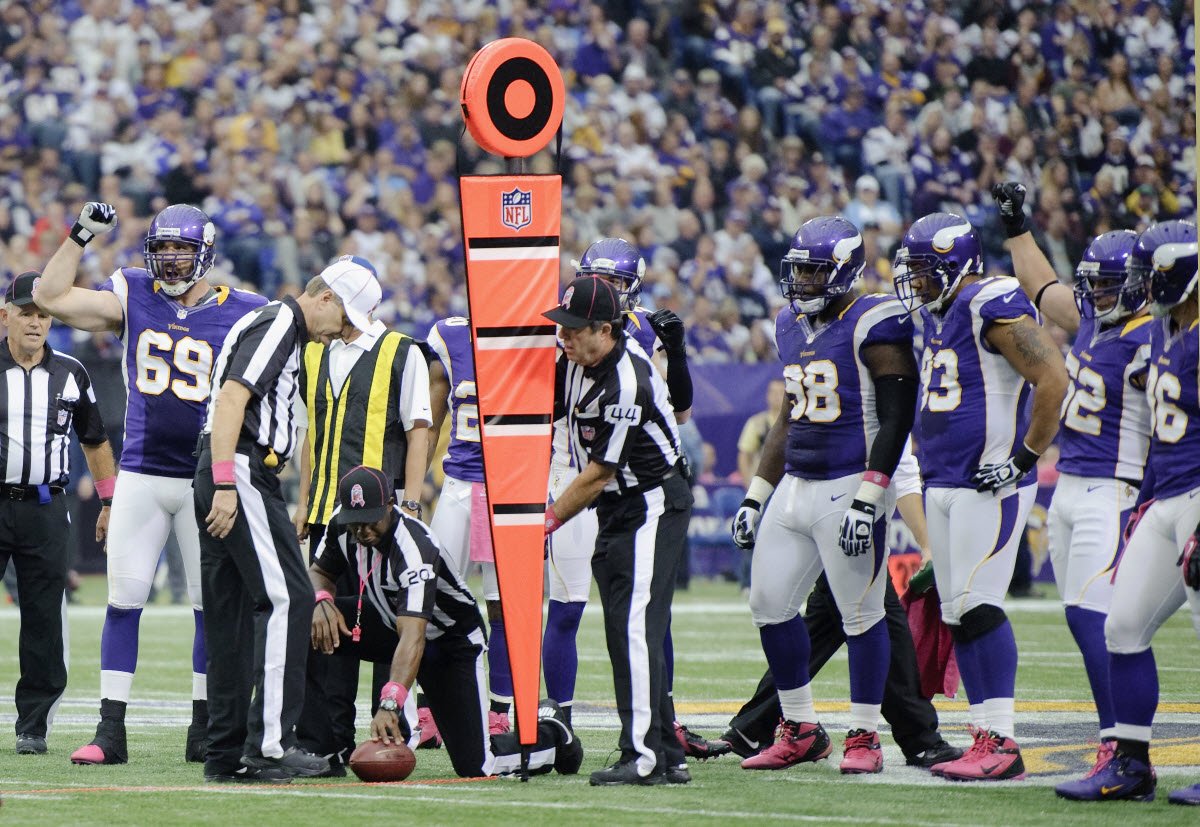 Two sticks connected by a chain. In a modern world, it is a strange relic for measuring distance that the NFL, a league that makes $12 billion annually in revenue, still relies on to make sometimes game-altering decisions.

The first-down chains, although not used as often as they were 10 to 20 years ago, played a huge role in the Arizona Cardinals’ win over the Green Bay Packers in the divisional round of the NFL playoffs. On a key drive in the fourth quarter with the Cardinals trailing, the officials twice went to the chain and awarded a first down to the Cardinals, keeping their drive alive. In each case, the chain had determined that the Cardinals had gained a first down by about an inch. The Cardinals went on to score a touchdown, the Packers would need a Hail Mary to force overtime, and Arizona eventually won in the extra period. In social media circles, this created quite a stir, with many wondering why the NFL still relies on such an old technology for something so important.

Interestingly, there are more advanced measuring devices and they have been around for about 70 years. A few years ago, Paul Lukas of Uni-Watch put together a timeline of devices that date back to the 1950s, including several that were patented and used in non-NFL games. Most of these devices included a system for visualizing the measurement from the sideline, eliminating the need to run onto the field. But there are actually a couple of reasons the NFL has never made the switch. First, there is a problem with using something more accurate than two chains and a stick. The chain is not the biggest margin of error in the equation — it is the officials’ eyes.

There is little sense in trying to improve the accuracy of the measurement unless you first somehow improve the accuracy of the original spot. Even when officials use a replay review, there is a good chance that they are missing the true spot by several inches, if not more. In other words, until the NFL starts using a more advanced version of the replay systems used in tennis and soccer — a football field is far more complex — there is no need for a more advanced measuring device.

More importantly, officials have figured out how to nearly eliminate the need for measurements, which in turn speeds up the game.

Despite what happened at the Cardinals-Packers game, measurements have become exceedingly rare, and there is a reason. That’s because on first down, the officials place the ball in such a way that it will make it easy to know if a player gained a first down or not. If the officials know exactly where the chains start, then they already know exactly where they end, and yard markers give them this advantage.

To explain, here is a recent example from the divisional playoff game between the Carolina Panthers and the Seattle Seahawks.

On a first-and-10 play in the second half, the Seahawks gained around 10.5 yards for what appears to be a first down. The officials awarded a first down and play went on without a measurement or any need for the chain. But before the next play, the officials “cheated” a bit.

Do you see what they did? If not, don’t worry — most people never see this little trick.

On the play, Luke Willson appears to be down at the 20.5-yard line, gaining a first down by 1 foot to 2 feet. Sure enough, the officials appear to have a good spot, coming in late and placing the ball at the 20.5-yard line. So far, so good. But here is where things get sneaky. Look at where the umpire sets the ball for the next play. He moves the ball back a half yard and sets it at the 21-yard line. If this is indeed the spot, then there should have been a measurement, but there wasn’t. So was the umpire’s spot a mistake? No. It was intentional. By moving back a half yard, the chain can now be placed exactly on the 21-yard line. Now the officials need only to see if the ball advances past the 11-yard line for the next first down. And with yard markers all over the field, this is easy for an official to see without needing the chain.

In other words, the Seahawks lost a half yard simply because the officials wanted to make it easier to know whether it will be a first down on the next set of downs. But there is another problem, one the officials also have a solution for.

The yard markers are 3 to 4 inches wide, and if they are being used to judge first downs, that’s a big margin of error. Well, to avoid this, most officials will tell the chains to not only set up on a specific yard line — rarely in between yard lines — they will also tell the chains to set up on the back edge of that yard line. That way, the officials know that if the ball is across any part of the white-yard marker, it is a first down.

It depends on the level of play — high school vs. college vs. NFL — and the crew, but in some cases, the officials will opt for more accurate placement of the football in crucial situations, such as late in the game or close to the end zone. But otherwise, it is quite common for officials to move the ball from its real spot for the sake of hoping to avoid a measurement down the road, and thus speed up the game.

So if the technology is rarely needed, there is less of a rush or need to update it at all. Of course, the chains are still needed occasionally — most often when the coach simply doubts what the officials already know — but even if it was more often, the NFL might still opt to use them for a simple reason: It adds to the drama.

One reason the NFL is not in a rush to use lasers to measure first downs? League likes drama of bringing out the chains.

There is something about the drama of seeing the chains come running out onto the field with most fans not knowing what they will determine. Nobody wants to see that happen a lot, but one to two times per game is more fun than somebody in a booth reading a computer-generated image and buzzing the referee.

This seemed to be confirmed in a 2008 New York Times column, in which Mike Pereira, then the vice president for officiating for the NFL, noted that officials make sure the TV cameras can see the measurement.

“When we measure, we make sure the players are clear so that TV can get a good shot of the actual measurement,” Pereira said at the time.

In the same column, John Mara, owner of the New York Giants, confirmed that the league loves the added drama:

There’s a certain amount of drama that is involved with the chains. Yes, it is subject to human error, just like anything else is. But I think it’s one of the traditions that we have in the game, and I don’t think any of us have felt a real compelling need to make a change.

In other words, the chains are not going away anytime soon.